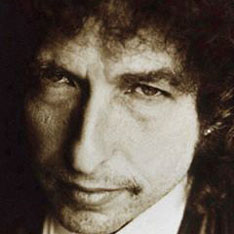 I know, I know, YESTERDAY was BOB DYLAN's birthday and I forgot. So sue me. I don't do the Bacardi Show Birthday Greetings thing all that much anymore. But here's a belated wish for the Bard of Hibbing, and one of those lists for which I am world-renowned.

MY 25 FAVORITE BOB DYLAN SONGS,
in no particular order other than the order that I thought of them, although it's kinda-sorta chronological:

MASTERS OF WAR
IT'S ALL RIGHT, MA, I'M ONLY BLEEDING
BALLAD OF A THIN MAN
DON'T THINK TWICE, IT'S ALL RIGHT
LIKE A ROLLING STONE
SUBTERRANEAN HOMESICK BLUES
JUST LIKE A WOMAN
MOST LIKELY YOU GO YOUR WAY AND I'LL GO MINE
GIRL OF THE NORTH COUNTRY
TANGLED UP IN BLUE
SHELTER FROM THE STORM
YOU'RE A BIG GIRL NOW
IDIOT WIND
LILY, ROSEMARY AND THE JACK OF HEARTS
ISIS
ONE MORE CUP OF COFFEE
SARA
CATFISH
SHOT OF LOVE
EVERY GRAIN OF SAND
GOTTA SERVE SOMEBODY
JOKERMAN
SWEETHEART LIKE YOU
GROOM'S STILL WAITING AT THE ALTAR
RING THEM BELLS

And, as an extra special bonus since I'm late and he's been so coverable over the years, here's a list of some of my favorite Dylan covers:

UP TO ME by Roger McGuinn from Cardiff Rose
YOU AIN'T GOIN' NOWHERE by the Byrds from Sweetheart of the Rodeo
TOMORROW IS A LONG TIME by Rod Stewart from Every Picture Tells a Story
MAMA YOU BEEN ON MY MIND by Rod Stewart from Never a Dull Moment
BUCKETS OF RAIN by Bette Midler from Songs From the New Depression
I SHALL BE RELEASED by Midler from Bette Midler
FATHER OF DAY, FATHER OF NIGHT by Manfred Mann's Earth Band from Solar Fire
QUIT YOUR LOW DOWN WAYS by Manfred Mann's Earth Band from Nightingales and Bombers
IF NOT FOR YOU by George Harrison from All Things Must Pass
MOST LIKELY YOU GO YOUR WAY AND I'LL GO MINE by Todd Rundgren from Faithful

OVERRATED ALBUM: 2001's Love and Theft, which was the beneficiary, I think, of some wish on the part of the critical community to give him props while he's alive;

UNDERRATED ALBUM: 1990's Under The Red Sky- now wait, hear me out- true, this is Dylan songwriting at its most lyrically simplistic, but the album maintains a good bopping groove, is rarely dull, and is often very catchy ("Wiggle Wiggle", the title cut, "Handy Dandy").
Posted by Johnny Bacardi at 5/25/2006 08:22:00 PM