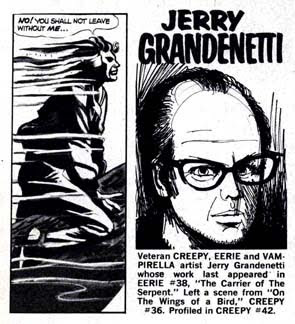 Word has reached the Internet, and by extension me, that Jerry Grandenetti passed away back in February. You may recall, if you've been reading my blog for any period of time, that I have written several posts praising his work in the 60's and early 70's, especially in the black and white Warren Magazines line, via titles like Creepy, Eerie and Vampirella. Although I was infatuated with the work of many of the artists represented in those pages, such as Alex Toth, Reed Crandall, Steve Ditko, Gene Colan, Wally Wood, Angelo Torres, Al Williamson, and many others, none of them grabbed my attention or captured my fancy like Grandenetti's surreal, expressionistic, almost hallucenogenic renditions of (mostly) Archie Goodwin's stories. Here are links to two previous posts, one an entire story, a personal favorite called "Rub the Lamp", and a single page from a later story called "Type Cast". As the years went by, I would read a bit about him here and there; I soon became acquainted with his work for DC, especially his run on the 60's Spectre, succeeding Neal Adams, inked by Murphy Anderson. The difference in styles was too jarring for many, and eventually the book was cancelled. Like Frank Robbins when he took over from Mike Kaluta on The Shadow several years later, fans didn't take it well...but I really liked his stint, although it wasn't until the mid-70's that I read them. Eventually, I found out about his beginnings working for Will Eisner, and his stint on DC's war comics. After a while, he moved into the greener pastures of advertising, but kept his hand in by illustrating a hodgepodge of things for DC in the 70's, mostly Joe Simon projects like Prez and in the pages of First Issue Special, The Green Team and The Outsiders. Sadly, his work was unappreciated by many at the time, who only seemed to appreciate the flashier, more modern-style artists of the next few decades. Regardless, I never forgot the charge I got from that 60's stuff, and he became one of the artists I was always evangelizing about to whoever would listen. When I started blogging, I was excited to discover his website, through which he solicited commissions, and I always thought it would be so great to get him to do something for me, but alas I never could afford it. The website is no longer online.
Anyway, short story long, of all the great artists I've admired, appreciated and loved over the years, few have given me as much pleasure as Grandenetti did in the 60's, my formative years. His was such a challenging style, it definitely could be an acquired taste, so I can see why it didn't receive the accolades I thought it deserved. In way of tribute, I want to post a series of pages and covers from different points in his career; I hope it will provide some insight into his talent and yes, genius, and perhaps enlighten you about why I revered it so. It's a very incomplete sample set, but I hope it will be satisfactory. 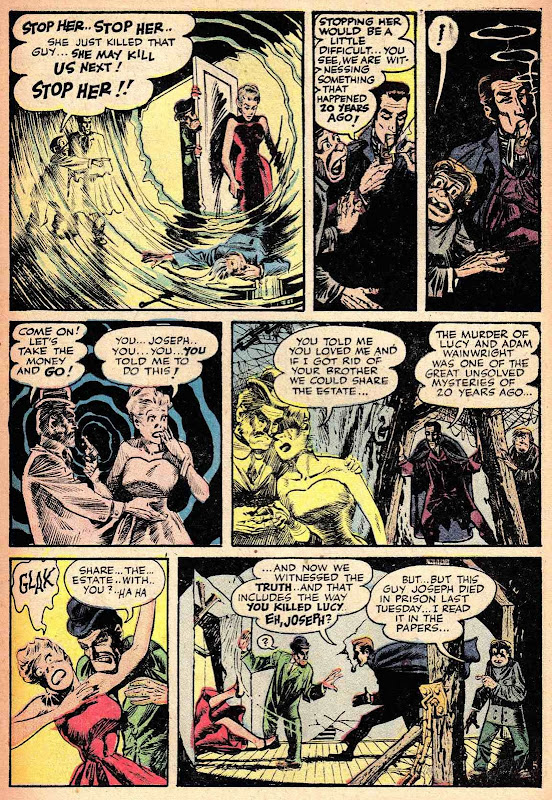 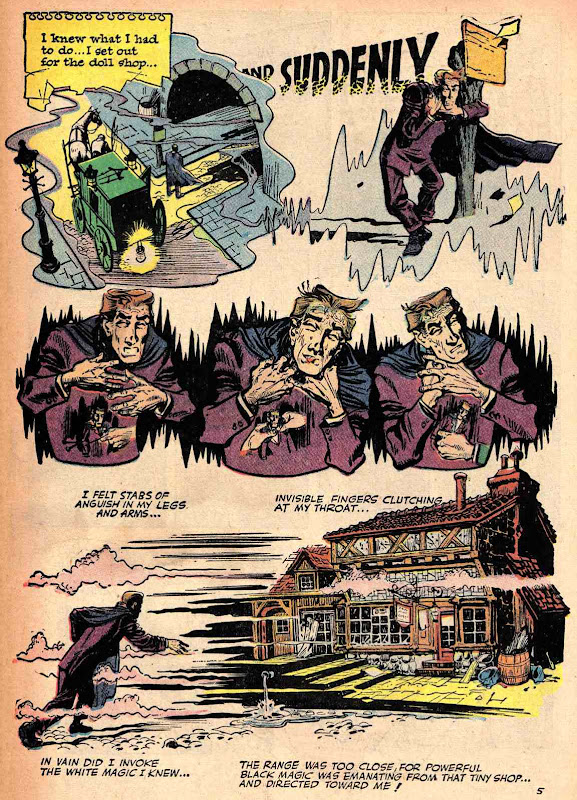 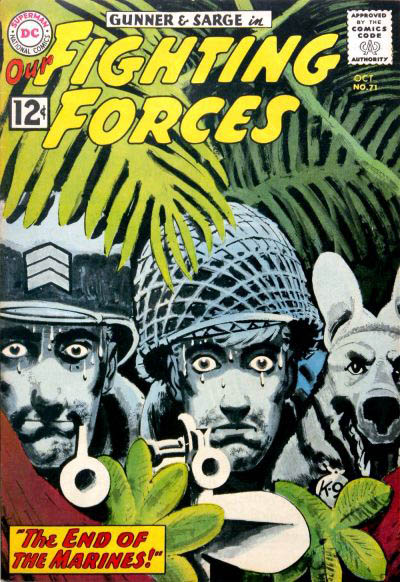 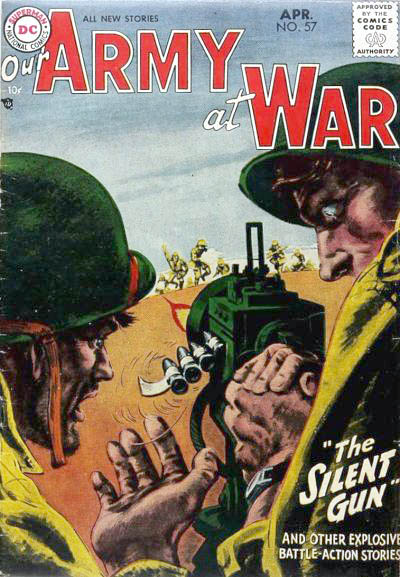 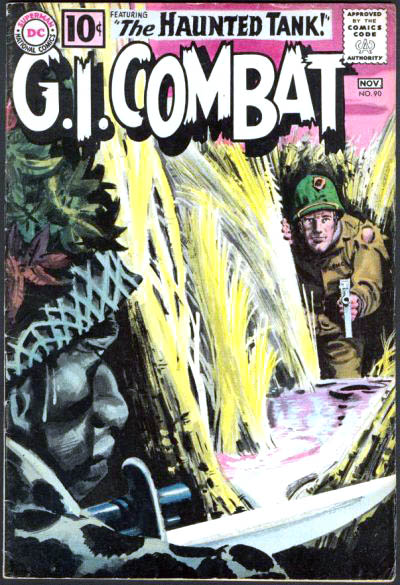 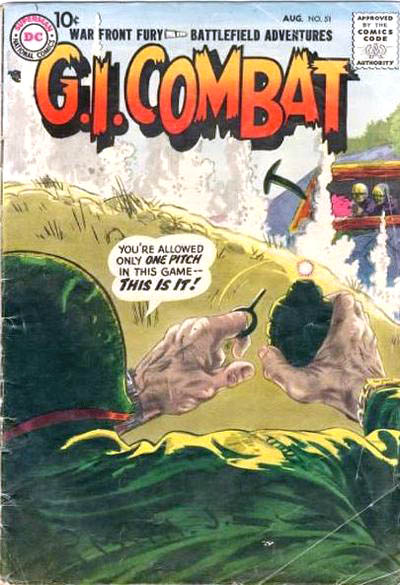 War comics covers for DC, many done with wash tones. 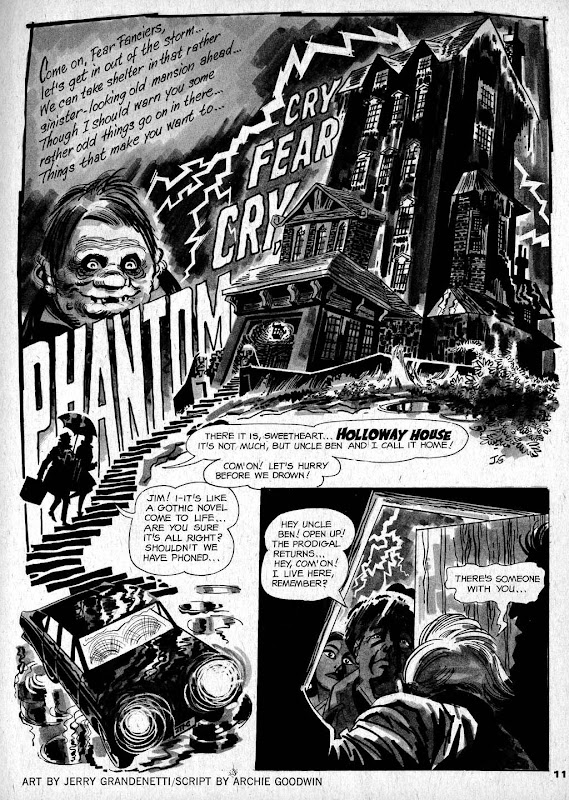 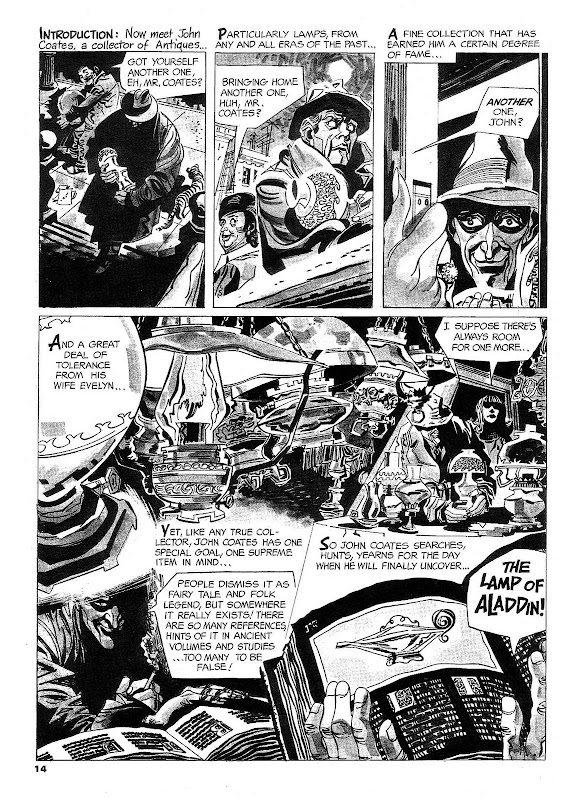 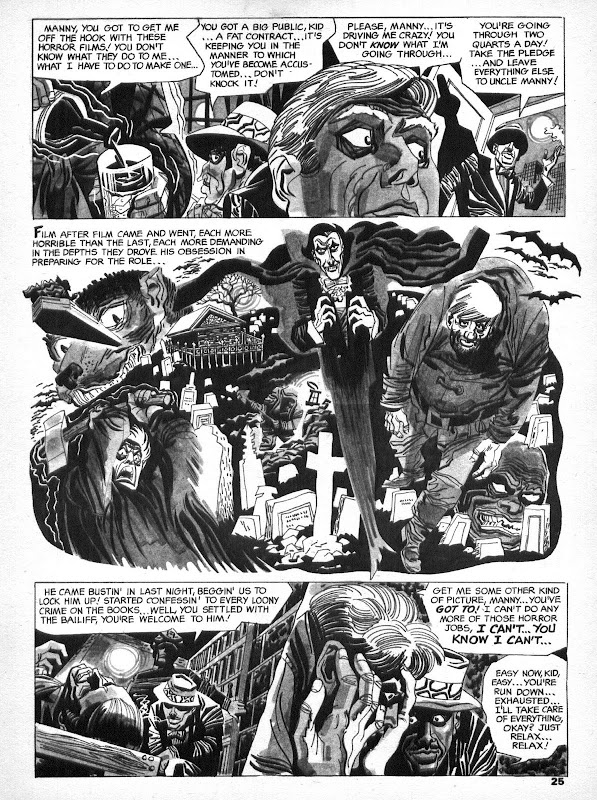 The uncut funk here, Warren pages from Creepy and Eerie. Grandenetti also did several stories as a ghost for Joe Orlando. Now, some DC pages from roughly the same period; the Spectre pages are inked by Murphy Anderson: 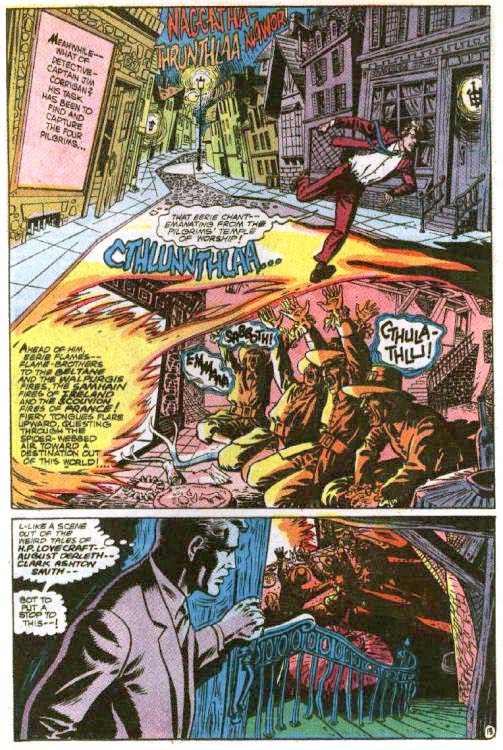 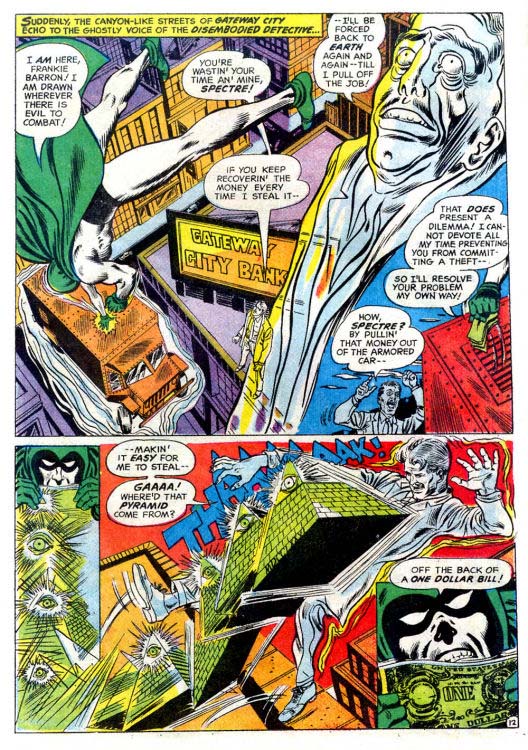 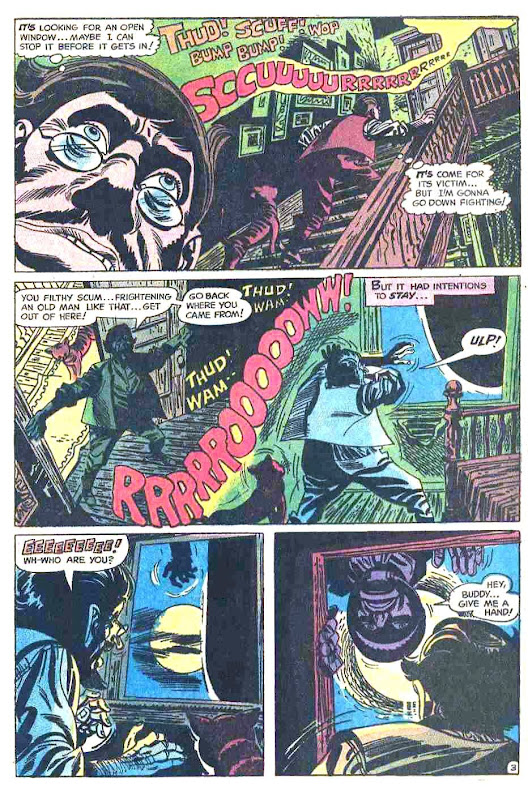 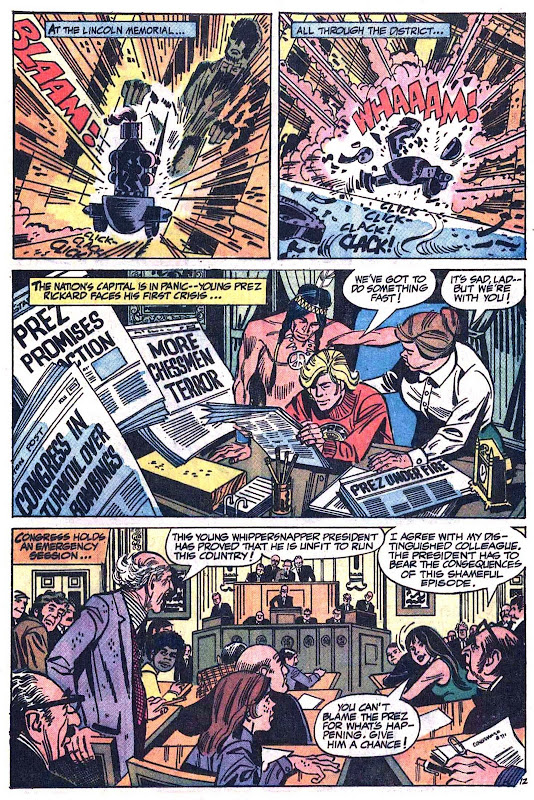 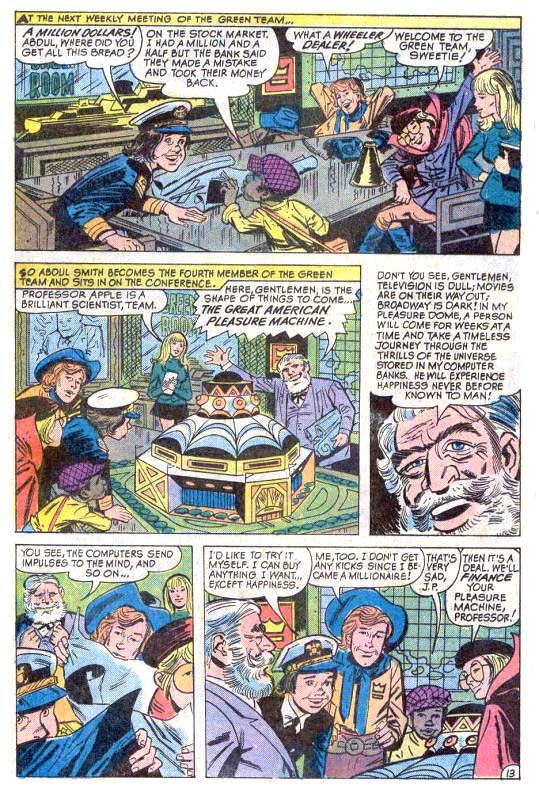 Always wanted to see a Batman-Green Team teamup. You'd think the cartoon guys would be up for that. Anyway, finally, the one page bio that appeared in Creepy #42: 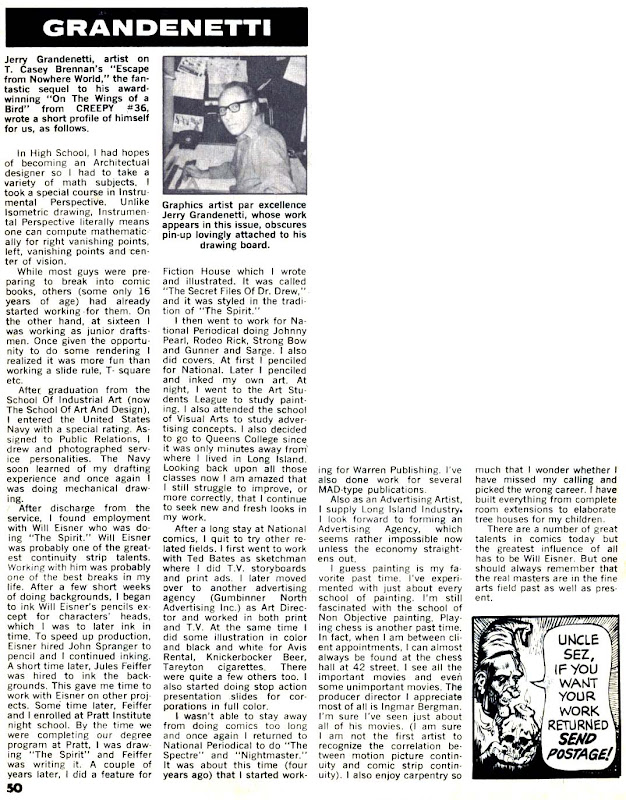