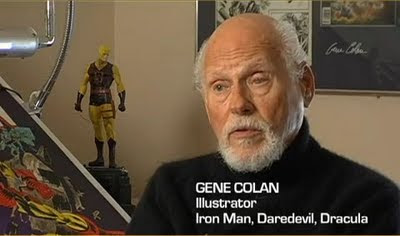 I know, it seems like the only time I post here anymore is when someone notable dies...but I couldn't not mark the passing of the great Gene Colan, whose art I've loved for decades, especially when I was growing up in the 60's and 70's.
I won't try to eulogize him or write an obituary, because in the past couple of weeks there have been many, many wonderful posts doing just that, and far more eloquently than I could. That said, because of what Colan's art meant to me as a young comics reader and aspiring comic artist in those years, I wanted to write something...and I think what I'll do is post a few pages from some of my favorite Colan-drawn comics over the years, literally the first ones that came to mind when I read about his passing. They won't be the usual suspects, I don't think...at least after the first few. 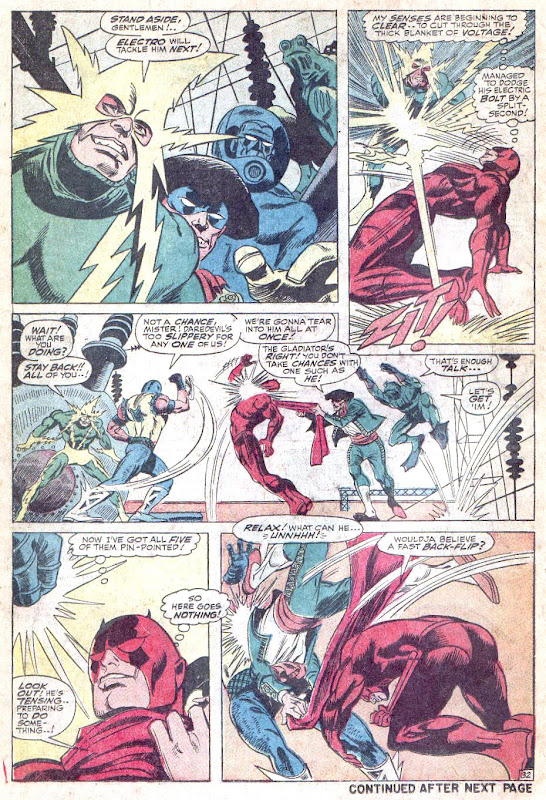 The first place I saw Colan's art was most likely on one of his Iron Man stories in Tales of Suspense, under his "Adam Austin" pseudonym, followed soon after by one of his Daredevil efforts. The looseness of his style was the first thing which caught my eye, especially in those days when perhaps only Neal Adams, then just starting out over at DC himself, was doing realism with a flourish- Colan's figure drawing and layout style was far looser, yet it was still grounded in the everyday world. Sometimes, especially in his 70's work, his figures always seemed to me to be dissipating into mist, as if the ink line was the only thing holding it together. I found it exciting and fascinating, but I could never ever draw like that, and believe you me I tried. I also noticed his stellar inkwash work in a few issues of Creepy and Eerie for Archie Goodwin; go here to read a favorite of mine from this period. The page above comes from Daredevil Annual #1, cover-dated September 1967; this one was Stan's attempt to follow the template he came up with for 1964's Amazing Spider-Man Annual #1, in which six of Spidey's most popular foes teamed up to battle him. Stan took Electro from the Sinister Six, and obviously 'Leckie neglected to realize that 1) Spidey's rogues gallery was far more deadly than DD's, and 2) it didn't work against Spider-Man, so why the heck did he think it would work here? Regardless, this was a fast-paced and fun tale which gave us DD fighting against each bad guy separately, as well as all together at the end, and a big part of the reason why was Colan's dynamic, kinetic art. I love how all hell breaks loose in that middle horizontal panel, as the "Emissaries of Evil" gang up on DD. This annual also sported a fun backfeature, which gave us a fly-on-the-wall look at a story conference with Lee and Colan...with a generous amount of whimsy to boot. One of the reasons why the whole Bullpen myth was so persuasive and enjoyable back then. You can read that story here. 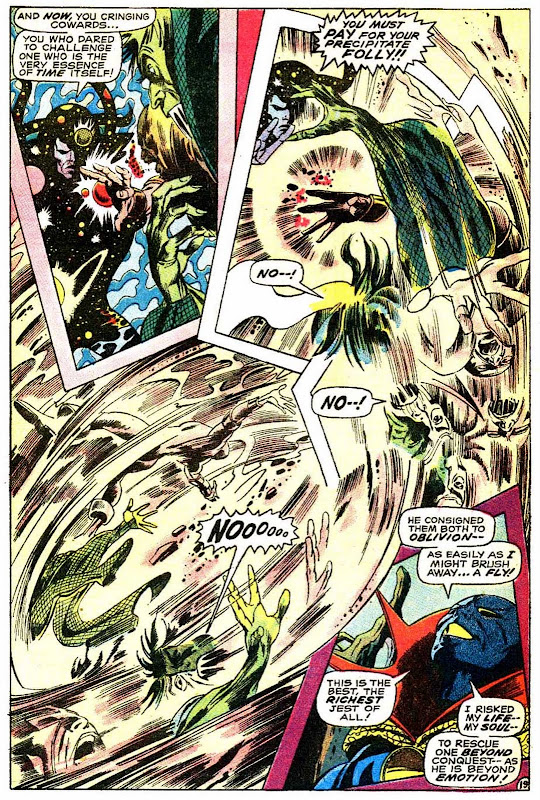 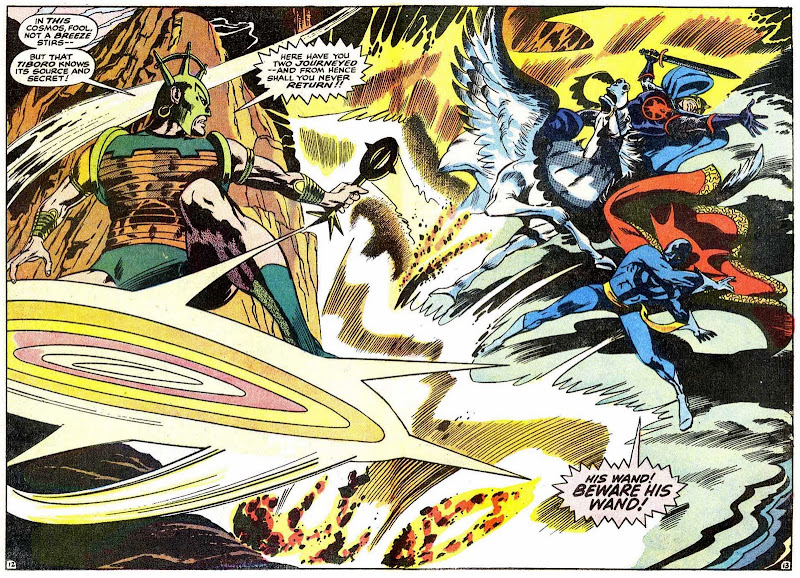 The above pics, top to bottom, are from Doctor Strange #'s 182 and 178.
Arguably, though, it was Colan's moving on to Doctor Strange, paired with Tom Palmer, who was generally agreed to be his best inker, which seemed to turn him loose and give him free rein to play around with page layout and further refine his storytelling style...which he later used to great effect on Tomb of Dracula, as well as his successful return to the character in the 70's. Colan's style, which was rooted in the newspaper strip/advertising realism tradition (but still was always quite loose, especially compared to the Caniffs, Crandalls and the like), took flight as he gave us page after page of vertiginous layouts and non-stop action; even when the Doctor and Clea had some quiet downtime things seemed to be bubbling under the surface. Below is a great example, and a page I love very much, from Doctor Strange #180; I first saw it on someone's blog right after his death was announced, but alas I failed to bookmark it and forget now where I saw it, otherwise I'd just link to it there. Apologies to the first poster. 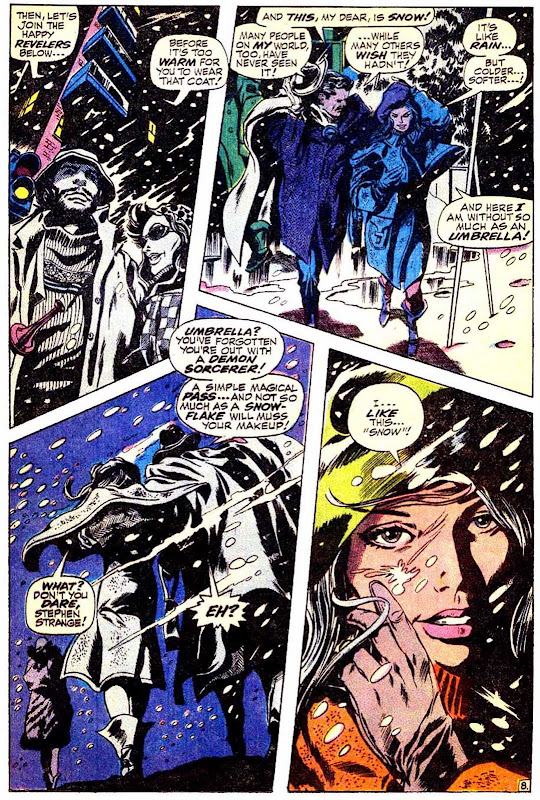 By 1970, it seemed like Colan had drawn every Marvel character's comic at least once, except Spider-Man; I remember loving his stints on Captain America, Sub-Mariner and the Avengers as well. Trying to stay as busy as he could, and to keep the money flowing, he began to do a variety of short stints on various titles in Marvel's fractured, hectic 70's period, and all the while doing Tomb of Dracula. ToD was a high point not only for him, but also in comics in general, as was Howard the Duck, a series I was mostly indifferent to as a teen (though I liked Steve Gerber's other work in general); when rereading ToD now, Wolfman's prose often seems overheated (as did Thomas' on those Doctor Stranges), but there's no denying Colan's artistry. He was truly well suited for horror stories, which also was made manifest on a short stint doing Brother Voodoo in Strange Tales, and the story below, from which I've pulled a couple of pages: 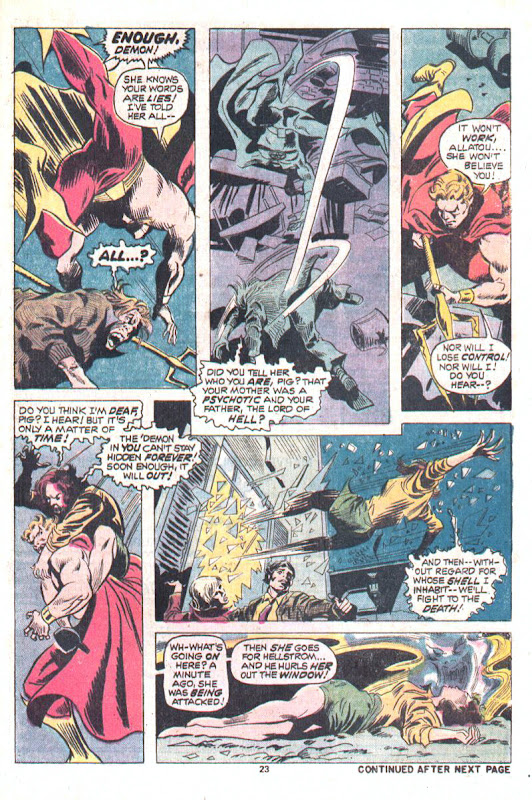 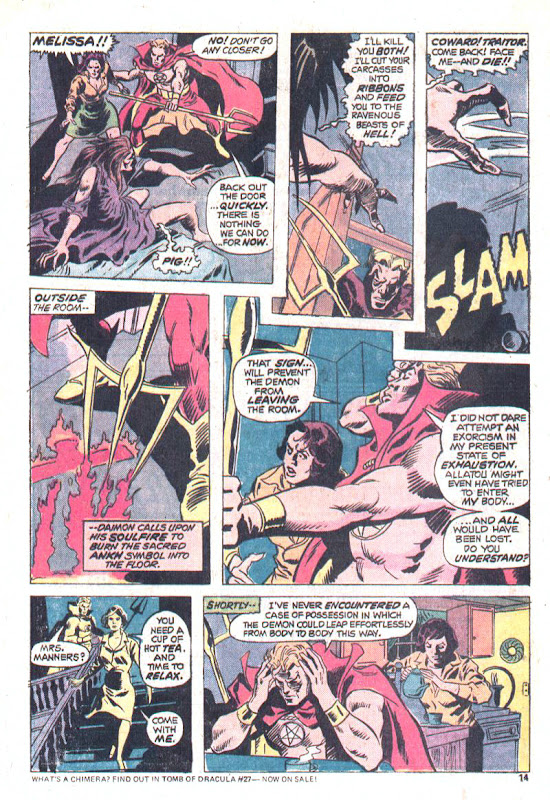 Marvel Spotlight was one of Marvel's showcase titles at the time; and featured the Son of Satan character which was created by Gary Friedrich and first drawn by Herb Trimpe. By the time he got his own feature in Spotlight, Steve Gerber wrote and Jim Mooney drew the first few issues, but for whatever reason the artist moved on after #17 and Colan stepped in for #'s 18 and 19 to bridge the gap between him and Sal Buscema, who drew the series until it was granted its own title a few months later. Anyway, Gerber's obviously Exorcist-inspired story could not have found a better realizer than Colan; it was completely rooted in the mix of the mundane and the fantastic that was Colan's stock in trade. He made this two-parter sing (despite some rather unsympathetic inking by Frank Chiaramonte), alternating polite dinner parties and dining room conversations and literal hell-raising action as Daimon Hellstrom struggles to exorcise a demon that can leap from host to host. Gerber tied it up with a clever solution, and went on to write some very imaginative stories before he was done with the character. If not for this two-parter, though, chances are I might not ever have seen the potential for excellence in the Son of Satan; I was not particularly interested in him before I plucked these off the spinner rack, attracted by Colan's art. Daimon soon became a favorite of mine, mostly thanks to Gerber, though Colan's rendition was my gateway. As a matter of fact, the first issue of Howard the Duck that I bought was the one in which Daimon made a cameo appearance, partly because I was tickled to see Colan draw him again.
Gene never limited himself to just horror or superheroes, though; in 1974, he took another fill-in assignment on a series that I was already a rabid fan of: Don McGregor's War of the Worlds (featuring Killraven). Regular artist Herb Trimpe had moved on by issue 25; Rich Buckler and Klaus Janson had done that one. Colan came along next, and provided his usual sharply observed job on one of McGregor's more whimsical scripts: 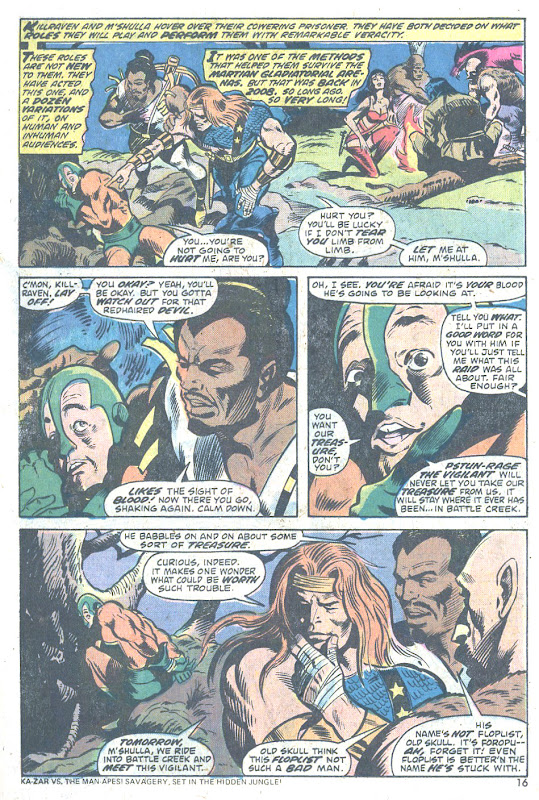 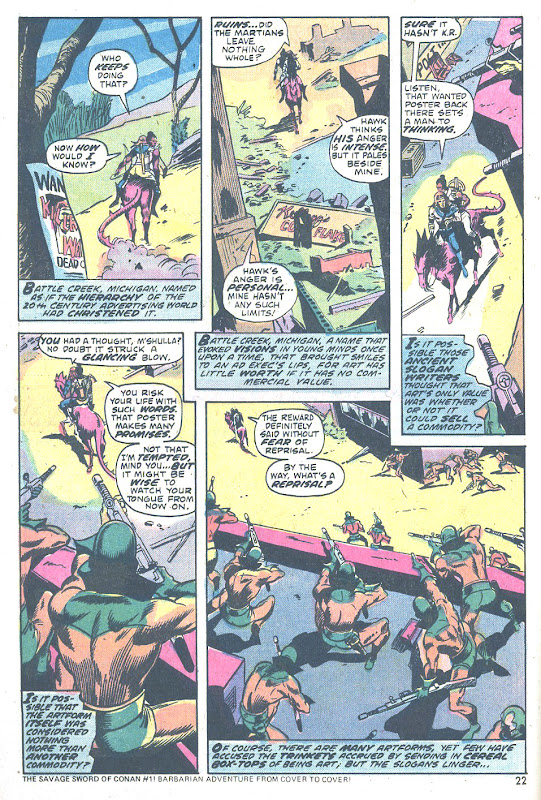 On his travels across the country to the "Place of Yellow Stones", Killraven and his men, with the Martians' killer Skar in pursuit, happened upon Battle Creek, Michigan, and encountered the leader of the group of its surviving residents, led by Pstun-Rage the Vigilant, who all guarded a treasure at the cost of their lives, if necessary. The revelation at the end is one of the most bizarre endings that I can recall in a comic book from the Big Two that wasn't written by Weisinger or Bridwell. Inked by Dan Adkins, Colan navigated all the action-adventure, as well as the drama and humor, of McGregor's wordy script (that bottom page, in particular, was notorious, showcasing a narrative style that irritated many, but I love it) with aplomb, despite never having drawn any of the characters before. McGregor and Colan collaborated a few times after that in subsequent years, forming a sympathetic team on such fare as the neo-noir Nathaniel Dusk (which I think I should revisit someday) for DC, and Ragamuffins for Eclipse. This story above was the first thing I thought of when remembering Colan and his career's effect on my life; even though the series went on to hit some very high highs with Craig Russell, it will always be a fondly recalled story in one of my favorite comics series.
And that pretty much does it for show and tell with me and Mr. Colan; after Dracula folded and Jim Shooter ran him out of the House that Stan and Jack and Steve Built, I did go on to buy some of his 80's work at DC like the occasional Batman or the aforementioned Dusk (never was too interested in Night Force or his take on Wonder Woman), but with diminishing returns; the fizz had seemed to go out of the pop for me. I still liked seeing his work here and there, especially on his return to Daredevil in the 90's and the outstanding commissions he did via his website. The decision not to saddle him with an inker on his infrequent appearances (which dated back to Dusk and Ragamuffins, if I recall correctly), brought on by his increased reluctance to subject his vision to the tender mercies of other, perhaps lesser talents, wasn't to his advantage, either, at least when it came to printed comics...his very good penciled commissions were something else again. When his health issues came to light, I did the dutiful blogger thing by linking to the drive to get him some financial relief for health care; I also recall a cover gallery on his birthday a couple of years ago. See the tags at right to be taken to those blog posts.
His passing was not a surprise, even as much as it was for me when Jeffrey Jones met his maker several weeks ago. That doesn't make it any harder to process, though, at least in my solipsistic view. Each year, more and more comics legends form my formative years die, and as I said before, every time it happens a little bit of my childhood dies as well. He was truly one of the all-time greatest, and his influence and legacy is vast. Even though he wasn't such a big part of it for the last decade or so, he will be missed merely by not being around.
I will be forever grateful and proud that I was able to experience it first-hand the way I did. I'm sure his work will remain an inspiration to up-and-comers for decades to come.
There have been dozens of outstanding blog posts and obits commemorating Colan's passing; I encourage you to visit the usual suspects (Heidi, Tom, CSBG, Robot 6, Blog@), to find them. I was especially moved, though, by Blake Bell's reposting of interviews with Colan's late wife Adrienne on living with him throughout his career. Here's the posts tagged "Gene Colan", all three parts are there.
Posted by Johnny Bacardi at 7/03/2011 06:14:00 PM 3 comments: