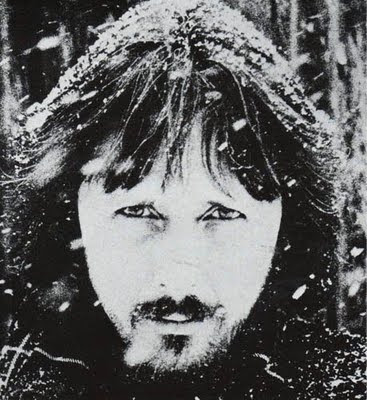 It was with a little surprise and a heavy heart that I read, first on Twitter then elsewhere as it was confirmed, that Jeffrey Catherine Jones passed away from, as Heidi MacDonald reported it, "complications from emphysema and bronchitis" at age 67 yesterday. Pardon me if I reminisce, OK?
The first place I saw Jones' work was probably in the 4th issue of The Monster Times; early on in that storied publication's history they were soliciting art and one-page stories from the likes of Berni Wrightson, Gray Morrow, Frank Brunner, and Jones. They would run them in the center spreads of the tabloid-style publication: 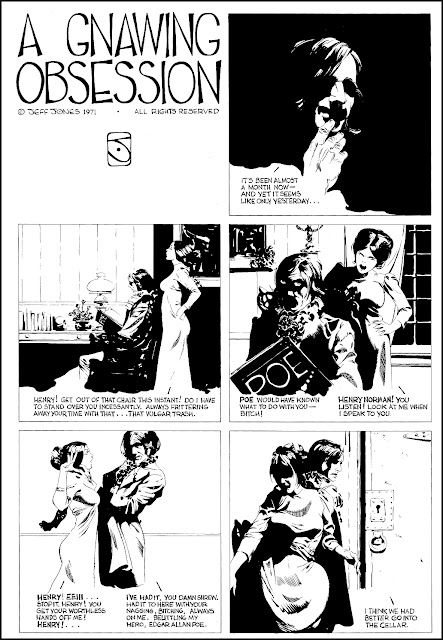 I suppose this would have been 1975-ish that I read it, though this story was dated 1971 and appeared in 1972. I didn't get my first issue of TMT until 1974, and I would have received this as part of a big package of Timeses that I spent about a summer's worth of allowance on. My memory being a bit fuzzy on some things, I don't recall when I saw my first issues of National Lampoon, in which Jones' excellent one-page strip Idyl ran. That most certainly would have been the second time I became aware of his work, I'm sure, unless I happened up on a friend's copy of NatLamp or perhaps stood at the magazine rack at the convenience store and read them as I was wont to do for a while (I was always nervous about asking my folks for money to buy a copy, or even to buy one with my own money and bring it home) before I started my TMT habit. 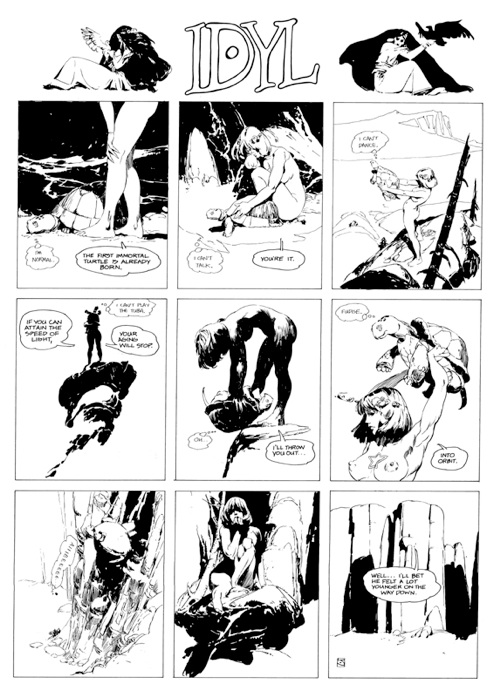 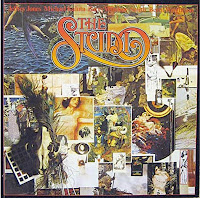 By the time I had reached 18, I had become aware of the amazing art book The Studio, which was also the name of both the location and the collective that Jones, Mike Kaluta, Berni Wrightson, and Barry Windsor-Smith had formed when they shared studio space in the 70's. Four artists whose work I admired above almost all others, together! I especially loved Kaluta and Wrightson, who had blown me away with their art on a number of projects, especially The Shadow and Swamp Thing, respectively, about five years earlier. Of course, Windsor-Smith's Conan was a favorite, as well as his later, ornate Pre-Raphaelite-influenced works, and then there was that Jones fella, who I remembered from Idyl and a bunch of paperback book covers. Believe me, I lived in that book for a long time, and copied and studied each page, back when I thought I could be an artist. 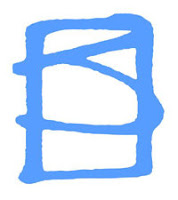 I was utterly fascinated with Jones' signature; that single letter "J", curved with the line across the top, and fitting stylishly within a loose square, looked as cool as anything I'd ever seen before. Yeah, bet your ass I copied it; after all, we did share a name. Eventually, I at least dropped the loose square, though to this day I really emphasize the J when I sign my infrequent doodles.
One of Jones' contributions was perhaps my favorite piece from any of the artists, the beguiling "In a Sheltered Corner": 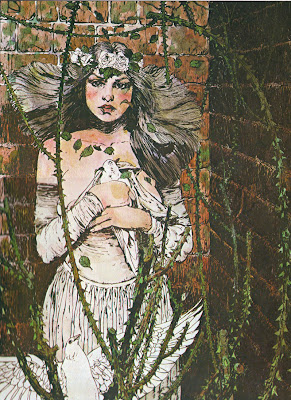 I wish I had a dollar for every time I sat down with a piece of paper and attempted to draw that face, with those lips.
I mean, geez, look at these guys: 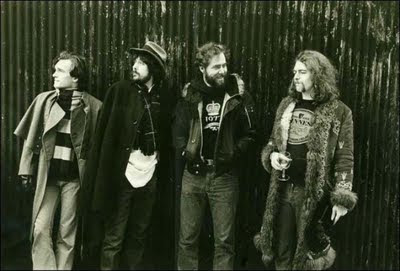 Jones is second from left. They looked just like rock stars- rock stars that could generate art masterpieces. That was exactly what I wanted to be at age 18. Exactly.
Anyway, after that, I kinda lost track of Jones and his work. While he appeared in Heavy Metal in the 80's (with a new Idyl-ish feature called I'm Age) I'd see it here and there with less frequency as the decades went by; I just assumed (as one, well, me anyway in those pre-Internet times when the goings and comings of the art/writing heroes was more difficult to keep up with) that he had found regular illustration and painting gigs in places that I didn't see. Of course, I read about his gender issues and his eventual 1998 hormone replacement therapy sessions; several years later (now I had the Internet, y'see) I read about her awful financial issues. Eventually, these seemed to get worked out, and I was proud to cite Jones among my Facebook friends; she posted an always-welcome stream of artworks both old and new. Eventually health issues became too much for her, and now she's gone.
I suppose that's just part of the price one pays for living on; one will see his or her heroes and people he or she admires pass away before them, even people who one still imagines, in their heart of hearts, to be still young and still strong and vital. Even though recent pics told another story, in my mind's eye I saw Jones and her work in the same way that I did at age 16, in 1976, and it saddens me no end to see people who I looked up to like that get old and die. Pushes me, slowly, another foot towards the grave myself.
All that's over now for Jones, and I'll be eternally grateful for the magnificent art. May she rest in peace, and I hope she's found a measure of happiness wherever she is. 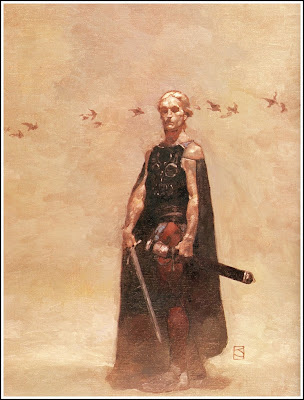 Credit where credit is due dept: I got most of the scans I posted here from these fine websites. Please visit them as often as you can, they're good people.
ETA: Not long after I posted this, Tom Spurgeon posted his outstanding obit. Go check it out.
Posted by Johnny Bacardi at 5/29/2011 05:53:00 PM 3 comments:

Where the hell am I, anyway? 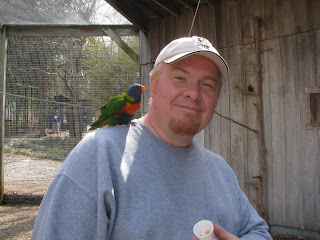 I'm still alive, and I do intend to take up blogging here again eventually. There just aren't enough hours in the day and enough energy to pursue it like I feel it ought to be pursued, it seems. But I do miss the days when I'd post several times a week, and keep thinking about a way to get back to that...so stay tuned.

In the meantime, I'm still reviewing comics over at Popdose.com, Tumblring and Twittering like mad, and even post the occasional item of interest over on Facebook, if you're desperate enough for my company to befriend me there.

Look for a post that I'm sorry I have to write later this evening, then stay tuned- keep me in your Google Reader feeds, whatever you do to follow blogs...and who knows? I may be back sooner rather than later.
Posted by Johnny Bacardi at 5/19/2011 12:55:00 PM 1 comment:

Email ThisBlogThis!Share to TwitterShare to FacebookShare to Pinterest
Labels: i me mine, me myself and I
Newer Posts Older Posts Home
Subscribe to: Posts (Atom)