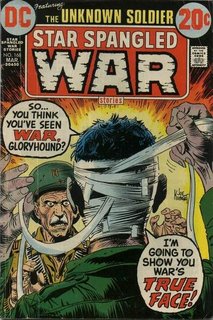 Whilst perusing the October DC solicits over at PopCultureShock (psst- Guy, Ronee- someone needs to relink the cover images; when you click on them nothing shows), I noticed yet another upcoming Showcase Presents collection which has me somewhat a-twitter: the SHOWCASE PRESENTS THE UNKNOWN SOLDIER VOL. 1 TP.

Huh? You say- war comics? But JB- you've never written very much at all about war comics! And it's true, except for some of those old EC and Warren stories, as well as Marvel's Sgt. Fury, I've never cared for the genre at all. But the issues of Star-Spangled War Stories that featured the Soldier as written by David Michelinie and illustrated by Gerry Talaoc (#183 to #200-something, IIRC- I don't have those anymore, damnit) were another exception. Most people remember Michelinie, if at all, for his Iron Man run with Bob Layton in the 80s, and a host of mediocre, forgettable Spider-Man tales...but it was on SSWS (and, to a lesser extent on Swamp Thing, replacing Len Wein on the first series) that he first cut his teeth and wrote some great dramatic tales, featuring the master-of-disguise and all-around ass-kicker Soldier. Usually these involved some sort of twist brought about by his adoption of this identity or that, almost always behind enemy lines- but Michelinie usually always could bring it home with a revelation at the end that was often downright touching or affecting in some way, and to me, this elevated the Soldier's exploits above the run of the mill battle epics of DC's "Make War No More" era. Talaoc, for his part, was never better than on the Soldier; the Filipino's loose style emphasized strong action, and he rarely disappointed on that score. Plus, he was always able to enhance Michelinie's moving story resolutions with mood-enhancing and solid staging.

I've always thought this run was among some of the best comics I'd ever read...but for some reason I didn't include it in the comics I kept when I sold my original collection, much to my regret. And it's entirely possible that I'll read these now, as a theoretical adult, and wonder what the hell I saw in them. But the important thing is that I'll get the chance to reread them, as well as earlier stories by some mighty good creators such as Frank Robbins, Archie Goodwin, Joe Kubert and others, most of which I've never read since I didn't start picking it up until well into Michelinie and Talaoc's run.