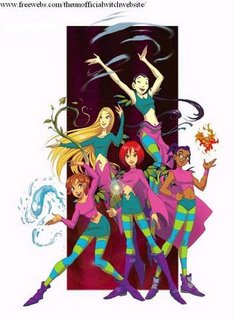 My new comics box came today, so I have some reading to do. In the meantime, let me share something with you, that readers of my LJ might remember: I have a teeny little attraction to/interest in W.I.T.C.H., fostered by seeing the Disney animated series on Sunday mornings.

Of course, I'm sure most of you (well, those that care, that is) know that W.I.T.C.H. is also a series of comics which originated in Italy, and Disney saw enough potential to greenlight a TV show. While I've seen several episodes of that, I had never read one of the comics or collections. However, I have now had an opportunity of sorts thanks to this site, which hosts scans of every issue up #47. Of course, me with the pokey internet connection doesn't always have the patience to wait for the pages to load, but I've enjoyed what I've read so far and I think you might too. I especially liked the art, done in a clear, crisp manga-tinged and Disneyesque style. The scans aren't always top notch, and as always with this sort of thing I have my doubts about the veracity of some of the translations, but that's just being mean and nitpicky.