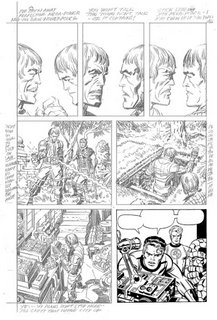 There have been several interesting (and plenty not-so) announcements coming from Comic-Con (aka "Nerd Prom" to those internet pundits of a snarkier bent...and judging by the live report I watched on the G4 network last night, I can't really dispute that), but this one has piqued my interest the most. Apparently Marvel intends to put out a special issue that will present what would have been Fantastic Four #102, but instead got chopped up and blended into #108, which came after Jack Kirby had bolted for the not-so-greener pastures of National Periodical Publications. Amazingly, the original pencilled pages, done as Kirby had one foot out the door, still survive and the thinking is to get someone to ink and color them (may I suggest Mike Allred, if Joe Sinnott isn't able/available?) and have Stan re-dialogue them (I'm not sure if this is such a good idea- Stan hasn't written credible dialogue since, oh, 1969). The Newsarama piece goes on to say that it will be released as "... a double-sized special, which will include the newly reconstructed version of the story, John Morrow's article about the lost issue illustrated with the unlinked Kirby pencils to the story, and a reprint of FF #108, so people can see how some of the material wound up being used."

It's funny- I was all of 11 years old when #108 hit the stands; and as such my buying habits were inconsistent and dependant on the whims of my parents, who gave me money to do so. So apparently I didn't buy an issue of FF from #93 until #109, over a year later...and while I'd seen the "Kirby is Coming!" announcements over at DC, it didn't occur to me that this meant he wouldn't be doing FF anymore. Naive kid, you know, plus we didn't have the all-pervasive comics media coverage we have now back in Antediluvian 1970. Anyway, for some reason I decided to buy #109 with my barely-earned allowance, and was a bit disappointed the Kirby was no longer drawing it. I liked the story OK, even that Nega (formerly Mega-, but without the blue helmet and robot dog he had in his video game, hee hee)-Man guy...but Buscema's FF just looked weird (I preferred him much, much more on Silver Surfer and Avengers. Still do.) Apparently I wasn't so disappointed that I dropped FF completely, however; a glance at the GCD FF page for this period shows me that I bought #'s 113, 114, and amazingly, 116-119 (four issues in a row!) before I stopped becoming a semi-regular purchaser of the World's Greatest Comics Magazine for what was apparently a hell of a long time- I'm thinking my next one was 1977's #177, thanks to its George Perez pencil art, Perez being a fresh up-and-comer then (certainly fresher than the Ron Wilsons and the like that had been illoing FF previously) and therefore interesting to l'il ol' visual-oriented me. By then, I had met my good bud Dave Puckett (who has decided to pull the plug on his own Elmo's Junction blog, much to the detriment of the Comics Blogosphere), had learned what a "comic collector" was and what he or she did, and had proceeded down that merry ol' road to ruin. Aw, I kid. feelin' all nostalgic and stuff on this early Sunday morning. Tamam Shud! Face Front, True Believers! Imperius Rex!

Anyway, short story long, I am very interested in how this proceeds, especially if they get a sympathetic inker, and will most likely be picking this up fer shur.
Posted by Johnny Bacardi at 7/23/2006 07:34:00 AM