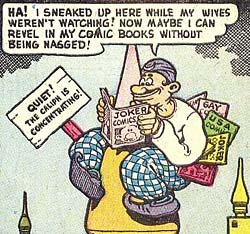 A new discovery for me is the ASIFA-Hollywood Animation Archive project blog, which features a treasure trove of great art. Among the highlights:

And that's just a few of the great posts they have there. You can go to any archived month and find interesting reading.

Also, I spent some time looking stuff up on YouTube, and found some great music-related video clips, like this:

The Sensational Alex Harvey Band performing "The Man in the Jar"! Also: the first part of "Man in the Jar", "Vambo"; "Delilah", and "Give My Compliments to the Chef". Holy mother of God, did I love the SAHB.

Ringo Starr performing "Only You", with Ed Wood spaceships and a Michael Rennie in Day the Earth Stood Still spacesuit, on the roof of the Capitol Records building with Harry Nilsson, smoking in his bathrobe!

McCartney and the 1972-era Wings performing "Mary Had a Little Lamb"! The poster says it was from the Flip Wilson Show, but I think it also aired on the James Paul McCartney TV special which isn't available on DVD to my knowledge.

The Beatles perform the play-within-a-play from Shakespeare's A Midsummer Night's Dream!

Jethro Tull's short film "The Hare Who Lost His Spectacles"! This one was shown for a while during Tull's A Passion Play tour, usually in the middle so the band could take a break. That's where this audio also appeared on the album. I saw this on a Tull DVD a while back, and of course I'm biased because Passion Play is one of my favorite albums- but this is Pythonesque and imaginative, and the choreography, especially at the end and especially involving bassist/narrator Jeffrey Hammond-Hammond, is great.