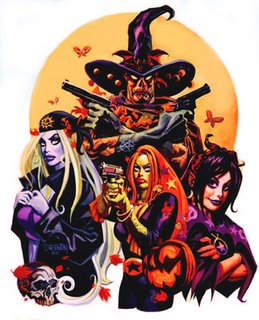 I was all excited because I read the news about the return of one of my favorite comics series of recent memory, Dan Brereton's THE NOCTURNALS, until I came across the words "three oversized hardcover collections" that will feature "all-new material, from stories to connecting sequences...", and once more the wind was taken out of my fanboy pirate ship's sails. But the article also goes on to mention the prospect of a new series, which I'm assuming/hoping won't be hardcover and probably upwards of $35-$50, called "The Sinister Path", and that gives me a glimmer of hope.

I don't think Brereton's ever topped the mix of adventure, imagination, and fun that he gave us with his proper Nocturnals series. Even the spinoffs, which usually featured the Gunwitch (a hulking crack-shot zombie who wears a witch hat with dingle-balls- you can see him above- and carries automatics) or Evening Horror (Wednesday Addams-looking kid with a plastic pumpkin full of supernatural toys, also in the pic), were of high quality.