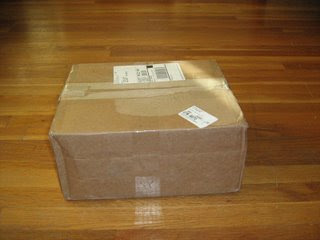 You may have noticed (at least I hope you've noticed) that I haven't had any comics reviews at all up here for two weeks now. The reason for that is simple: I haven't received any new comics! My DCBS shipment, which was shipped to me via DHL on the 10th of June, was lost in transit and it has been a protracted and somewhat annoying endeavor to get it straightened out. In fact, as of this writing it still has yet to be straightened out to my satisfaction, and I'm supposed to be getting a NEW shipment this Friday!

When Monday the 16th rolled around, and I still had no comics, and also after checking the DHL website tracking page (which showed my box was somewhere at the Memphis, TN hub), I called DHL and asked them to look for it. They agreed to, and said they'd call me by noon on Wednesday to inform me of what they found. Wednesday comes, no call. So, I call them back, talk to a different person, and get the same assurance. Finally, on Thursday, I get a callback on the first call I made, saying that yes indeed it certainly seems like they have lost my shipment, and I should call DCBS and notify them. They'll fill out a Loss/Damage Claim Form, and send me a new shipment; they even sent me a file to send in case they didn't have one. Groovy, said I. So I notify DCBS, and send along the file. Here's where the annoying part comes in. Even though I told them that I had already taken steps to locate the package, and was told, BY DHL, that it was indeed missing, they wouldn't or couldn't take my word for that and had to contact DHL themselves. This was on Wednesday the 18th. I emailed back, saying that I had already taken these steps, and I didn't want this to drag on for days more. Then I heard nothing until I emailed them on Friday, asking for an update. They replied

"We have not yet heard one way or the other. Our rep told us that they are looking for it now and if it does not turn up by Monday a loss claim on the package and we will pull together a replacement for you."

Monday comes and goes, and no word. I emailed today and as of this writing haven't heard anything. If they had only taken my word for it at first, and noticed that I sent a document FROM DHL to them, this would have been resolved by now, I'm sure!

Anyway, what I'm hoping is that they will put my order for the week of the 13th in with the new shipment (of which I have yet to receive confirmation that it has indeed shipped, naturally, but sometimes that happens with them), which seems to be ready to send according to the DCBS website.

So, short story long, I don't know if I'm gonna get ANY comics this month for sure...but if I do they should be these:

You remember these, I'm sure from my previous post on the matter...plus:

Some interesting stuff in that bunch, especially the Umbrella Academy trade, of which I've heard naught but good word-of-mouth.

This whole thing has me kinda put out with DCBS, with whom I've only really had one other incident (that was partly my fault). Someone recently made me aware of Heroes Corner's site...they offer substantial discounts, ship via FedEx, and best of all offer free bags and boards, as well as free shipping over $75, powerful incentives all. I've been pretty faithful to DCBS, after ending my longtime relationship with my Bowling Green comics shop...but HC is flirting hard with me and my admittedly weak nature is strongly tempted. We will see!


ETA: Got an email later this afternoon from DCBS, and they were indeed sufficiently satisfied that I wasn't lying or trying to scam them for more comics or something, so they will box my replacement shipment together with my new one, which I should be getting this weekend- if fortune smiles, and DHL does their job.
Posted by Johnny Bacardi at 6/24/2008 02:51:00 PM