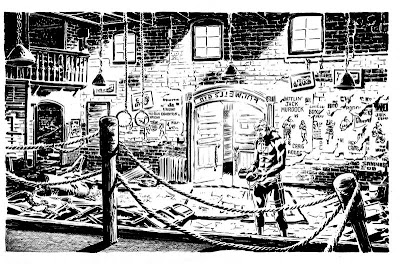 Thanks to a Twitter post by B. Clay Moore, writer of fine funnybooks of distinction, I discovered the website of one CHRIS SAMNEE, whose name makes him sound like a Hobbit but is in reality one of the best newish artists I've seen lately. He draws the best Batman this side of Dave Mazzuchelli, and does right by Daredevil too. DC really missed the boat by not letting this guy draw Grant Morrison's recent run on the Caped Crusader, and when Mike Lark decides to move on to less depressing pastures, it sure wouldn't break my heart to see him take over art chores on Daredevil as well!

In other tidbits from hither and thither:

Right now, if you move quickly, you can download the pilot episode of the new ABC Family series based on THE MIDDLE MAN comic and graphic novel series from iTunes. I did so, and I'm pleased to report that I found it to be much better than this sort of thing tends to be; TV, unlike movies, hasn't learned not to screw around with comics properties just for the sake of screwing around- but no doubt due to the presence of series co-creator Javier Grillo-Marxuach, who aided in the development, this doesn't seem to be the case here. If you're familiar with the comics, it's a wacky mix of superhero, martial arts and spy-movie genres, and that what-the-hell feel remains intact. The cast is agreeable, less so Matt Keeslar as the Middleman than Natalie Morales, who plays Wendy, his assistant. While not a redhead with glasses, she still is very fetching and has a nice way with a quip, and together they have good chemistry. The show is, as is so often the case these days, full of clever little asides and pop culture references, even to the point of devoting a few minutes to an Avengers-style (Steed and Mrs. Peel, not Tony Stark, Cap & Co.) montage in which the pair mug and pose just like MacNee and Rigg in their heyday, appropriately enough, this episode's director is Jeremiah Chechik, who helmed that misbegotten Avengers film with Fiennes and Thurman...but he does have National Lampoon's Christmas Vacation on his resume, so he's all right in my book. Morales reminds me more than a little here of Studio 60's Amanda Peet, firing off clever quips right and left as fast as she can...and as with Studio 60, that's my biggest problem with this. Nearly every character is quirky to the point of preciousness, from Mary Lynn Rajskub's chatty monotonistic simian research center head, to Wendy's animal-rights activist roommate, to the leads themselves, as if they're just a group of characteristics instead of real characters. Morales in particular succeeds in fleshing hers out, but her sidekick Keeslar's not so fortunate, which is passable because he's pretty much a one-note character anyway, even in the comics. Anyway, as with Aaron Sorkin's folly, it gets wearing to see the characters being constantly on, rapid-firing quips in a rushed monotone to everyone and everything, seemingly to show how clever the writers are more than anything. That's really my biggest complaint, and even on top of this I still found myself laughing at some of the bon mots more often as not. As low-budget comic-book TV adaptations go, The Middle Man seems to be a winner. You can go here , to comic artist/co-creator Les McClaine's LJ, to get a link to download it. I gotta say, too, that I enjoyed watching it on my Mother Box, I mean my iPod Nano...the screen's tiny, sure, but the resolution was good, the picture was crisp, and the sound was very good. Of course, you can watch it anywhere you want, I guess, including TV- it airs June 16th at 8 and 9 PM EST on ABC Family. I might just watch it then, too.

They tell me I'm getting new comics tomorrow, and this be them:

MANHUNTER #31: They keep killing it, and it keeps coming back! Who says Marvel has the monopoly on zombie comics? New artist this time out, Michael Gaydos, whose work reminds me a little of Shawn Martinbrough in places, and I like Martinbrough's work very much. Not "buy Ayre Force much", mind you (Angeltown was the last straw there), but I like it a lot on the right project.

WONDER WOMAN #21: I know- "Johnny B! What the hell! A Wonder Woman comic? By Gail Simone?" Yes, yes and yes because it is my understanding that none other than my old buddy Beowulf: Dragon Slayer is making an appearance in this one, which means I wanna see it!

Go HERE to read the first fifty or so pages of THE APOCALIPSTIX, a new Oni series from artist Cam (Catwoman, Seaguy) Stewart and writer Ray Fawkes. It looks hellasweet, as the kids used to say. I hope I get a copy, I somehow neglected to preorder it!

Go here to read "Thrill Kill", an unforgettable mid-late 70's Archie Goodwin/Neal Adams Warren Magazine (was it in The Rook? I forget) collaboration and probably the last worthwhile thing Adams has done to date in the sequential storytelling area. Well, there's Skateman, as Kevin Church reminds me, but really that was in a league of its own.