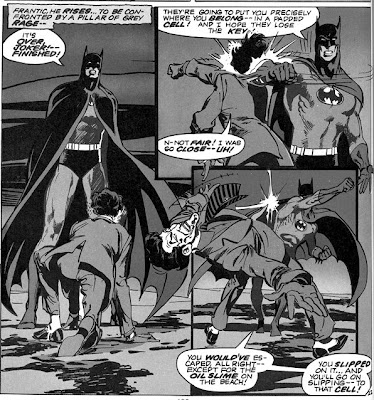 Bahlactus hath called and I hath answered! Usually I try to find weird, obscure and/or unusual fight scenes, operative word being try, and it's twice as difficult since I still don't have use of my scanner and am limited to stuff I can scavenge off scans_daily and other venues hither and yon. Anyway, tonight's black and white throwdown is the exact opposite of weird, obscure and/or unusual- it's your basic Batman/Joker beatdown, which we've all seen thousands of times in thousands of places. At least it's one which is illustrated by the redoubtable Neal Adams, who by the time of this issue (#251, cover-dated September of 1973) was at the end of his seminal run with Dennis O'Neil, only doing art for two more issues before turning his attention to drawing Grand Funk album covers and such. Anyway, this is from the well-known and dare I say classic of its kind "Joker's Five-Way Revenge". Bad joke by Bats there at the end.