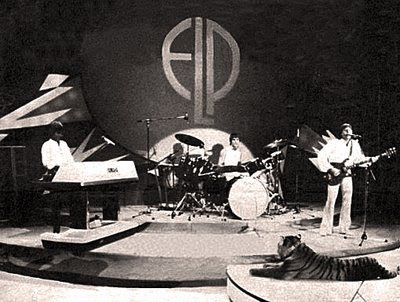 Got tagged by the estimable Plok for a meme that I've seen making the rounds lately, and since I'm not really coming up with anything to put here lately (in fact, still haven't read all the comics I got last Friday!), I think this will do.

List seven songs you are into right now. No matter what the genre, whether they have words, or even if they’re not any good, but they must be songs you’re really enjoying now, shaping your spring. Post these instructions in your blog along with your 7 songs. Then tag 7 other people to see what they’re listening to.

I listen to five times that in the course of a normal day; that really makes it hard to pick tracks that really stand out...but these are some that came to mind when I pondered the criteria. This is going to be less of a "songs that shape my Spring/Summer" list and more of a "songs that I remember digging lately" list. And yep, don't worry, it's all boring old fart 70's music, or music made by boring old farts that came to prominence in that decade in which I grew up in most ways.

1. I COME TUMBLIN' by Grand Funk Railroad (E Pluribus Funk)
As I've stated on many occasions, when I was 11-12 yrs of age GFR was the band all the cool older kids listened to. Pluribus was the last album they did before expanding into a four-man group, firing their manager/producer, and enlisting Todd Rundgren to make them pop stars via We're an American Band. Anyway, I used to have this album on 8-track many years ago, and gave it a good proper listening to in its time, but it had been many years since I'd had the opportunity to do so again until recently acquiring this album via download. I had forgotten what a non-stop hard-rocking album this was, with the bass up front in the mix, and "Tumblin' " is a great example that also sports good group harmonies.

2. DOLPHINS by Tim Buckley (Sefronia)
I've been an absolute fiend for Buckley lately; acquiring nearly all his albums in the last few months. He started out as a gentle folkie type, but soon metamorphosed into a restless stylistic chameleon whose subsequent albums ran the gamut from Miles Davis-influenced experimental to Van Morrison/Ray Charles/Rolling Stones style R&B, but never sounded mawkish or imitative. And his voice- oh my god, the man could sing like no one on this Earth. Problem is, the more he tried to break new ground and keep his restless muse happy, the farther into obscurity he sank, each album selling poorer than the previous until his premature drug-related death in 1975. This is a cover of a song by New York folk hero Fred Neil, whose greatest claim to fame was as writer of "Everybody's Talkin'", which Harry Nilsson took to the bank via the Midnight Cowboy soundtrack- Buckley performed it from his early days, and had long intended to record it. Finally, he got around to doing it on 1973's Sefronia, his penultimate release, and I think he really did it justice. To see him performing this live from this period, go here, and prepare to be amazed.

3. BYE BYE BLACKBIRD by Ringo Starr from Sentimental Journey
Paul released a home-crafted set of pop songs, John his highly personal and abrasive kiss off to his former group, and George bided his time, delivering a mammoth set of finely crafted songs that he'd been sitting on, in some cases, for three years. What did Ringo do in the wake of the breakup? Why, he put out an album's worth of standards, "for me Mum" as he put it at the time, probably the most non-rockish thing he could have possibly done. If you ever wanted to hear what Richie sounded like singing "Love is a Many Splendored Thing" and "Stardust", with appropriate accompaniment that was arranged by a clutch of celebrity arrangers such as George Martin, Paul McCartney, Richard Perry, and Quincy Jones, well, here you go. This is the second cut and probably the catchiest, arranged by Maurice Gibb using a big band arrangement with banjo. Tra la la. I think he could do worse than to revisit this type of music, even though it's a bit late for the Harry Connick, Jr./Brian Setzer-led Big Band and Swing revival. Anything's better than the last four or so half-assed mediocre-sounding pop records he's done.

4. DAUGHTERS OF THE SEA/FLYING CLOUD by the Doobie Brothers from What Were Once Vices are Now Habits
Song one is a rock/folk exercise with a nautical theme, sung and written by Patrick Simmons. You remember, the guitarist with the really long hair that wrote "Black Water", which is also on this album. Song two is an lovely synth/acoustic guitar-driven instrumental. When I was a teen and in my early 20's I loved the good-time hippie-vibe summertime keg party rock/folk boogie-band stylings of the Bros., before Mike McDonald joined up and changed them (for the worse) into a poor man's Steely Dan. These two tracks always remind me of listening to them in the back seat of my parent's car at 4 AM one summer, on my old portable 8-track player with the sound down low, as we drove to Florida for a vacation when I was (I think) 15.

5. NOBODY LOVES YOU LIKE I DO by Emerson, Lake and Palmer from Works Vol. 1
Toldja this was a bunch of old boring fart music, didn't I? Anyway, after shooting their collective wad with 1973's excellent (well, I think so anyway) Brain Salad Surgery album, they preceeded to fart around with live albums and such for four years, even planning to do the "simultaneous release of solo albums" thing that Yes beat them to by a year because they apparently had lost all patience with each other, until finally deciding to put them all together as one big double album extravaganza called Works Vol.1, which makes it sound a lot more impressive than it really was- Emerson's side was exciting for piano enthusiasts and precious few others; drummer Palmer's side was a collection of melody-challenged percussive-themed pop songs with all-star accompaniment, and the two-song side that featured the trio reunited in the studio for as long as they could tolerate each other contained a tuneful, but overlong instrumental Copland cover and a really overlong and melody free song about Pirates, which at least had the saving grace of Pete Sinfield lyrics. But Greg Lake's side was a whole 'nother thing- collaborating with Sinfield, he presented five grandiose acoustic-guitar based and orchestra-driven ballads, three of which are effectively romantic, one of which is quite cynical and features Sinfield's best wordsmithery, and then there's this one, which seems to be a love letter to ELP fans. It's bighearted and sports another great melody, with a atmospheric, muted guitar solo in the middle. I rarely listen to the other three sides, but lately I've been in the mood to hear Lake's, and this song, in particular.

6. BIRDS FLY SOUTH by Maria Muldaur from Open Your Eyes
Eyes was Maria's last release for Warners, where she found her greatest success only six years earlier with "Midnight at the Oasis". By 1979, she was trying to stay current by working some contemproary disco rhythms and R&B into her folk/jazz/country mix, and it was sometimes an awkward fit. Still, especially if you're a fan, there's a lot to like about this album, which often reminds one of contemporaneous Little Feat in places and still features a couple of tracks that remind of past glories, like this one. It's a sweetly cheerful little old-fashioned sounding soulish shuffle in which Maria informes her beau that when he's down she'll fuck him and make him feel all better. Honestly, that little scamp. I don't have the album credits handy, but someone contributes some sassy/sprightly harmonica at the beginning that is somewhat annoying early on but adds a lot in the middle solo break.

7. DOWN ON RODEO by Lindsey Buckingham from Under the Skin
This is from Lindsay's long-delayed 2006 follow-up to his last solo album, 1992's Out of the Cradle. It's mostly acoustic and sparsely arranged, with Buckingham playing most of the instruments, save for Mick Fleetwood and John McVie providing a rhythm section for a couple of cuts...and this is one of them. I actually enjoy this album a lot more than I expected- I like Lindsey more when he's in full-on studio wonk Brian Wilson wannabe mode and often find his manic acoustic playing hard to take. The lead cut is the worst offender, but it's actually not that bad once one gets acclimated. Anyway, in this case "Rodeo" refers to Rodeo Drive of course, and it's kind of a melancholy look back at days gone by in later years with a dynamite melodic hook in the chorus.

And that's only a few- if I had done this a couple of days later, there would be a different set of songs, of that I've no doubt. I'm not going to tag anybody else, but if you think you'd like to give it a whirl, please let me know because I've enjoyed reading many of the others I've seen around the 'Sphere.
Posted by Johnny Bacardi at 6/05/2008 03:07:00 PM