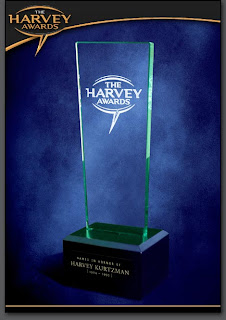 The 2008 Harvey Awards nominations were announced earlier last week. Not-so-fashionably late for the party as always, I thought I'd post 'em here with a little commentary after each, as if I was a real pundit or something. Shall we?

It's hard to disagree with the names on this list; while I don't read Brubaker's Cap I did read his Immortal Iron Fist with Matt Fraction and Daredevil, not to mention Criminal, which has to be at least as good as the title he is nominated for. I've not read Diary or the Disney collection, and I've never really understood the appeal of Vaughan's writing (Dr. Strange: The Oath notwithstanding, and that should have been nominated before Y). Morrison is Morrison, of course, but to me All-Star Superman was inconsistent in 2007. I'm thinking Jason Aaron should be on this list for Scalped, as well as Andy Diggle. I'm sure a lot of Casanova fans are wondering where the aforementioned Fraction's name is. Anyways, I'd give it to Brubaker, based on his body of work and not necessarily his Cap, which I'm sure is quite good but doesn't interest me in the slightest.

Who is this Van Horn fella, and why is he being so acclaimed for doing what I'm sure is just a patch on Barks, Rosa, and those who have come before? I mean, I realize I'm saying this sight unseen, and for all I know I would be blown away by the scope and complexity of his take on the Ducks...but I seriously doubt that Disney is going to allow much in the way of groundbreaking interpretation. So what the hell? Assuming DCBS and DHL don't lose another of my comics shipments, I'll soon be reading Umbrella Academy, so I can see what Ba's been up to. As with Brubaker, I know it's of high quality regardless. Anyway, these are worthy artists all, and while if it was up to me I'd give it to Guy Davis, I'll bet it goes to Cassaday or Quitely, probably the latter.

Oh, so cartoonists aren't artists? And there's that Van Horn guy again! Kindt is great but his style works against him more often as not when it comes to storytelling, and I haven't seen Wimpy Kid. I think Lolos is a dark horse- Last Call was quite evocative- but this will probably be between Cooke, who shouldn't win because his 2007 Spirit issues were a muddle and the art didn't save them, and O'Malley, who is riding high right now. I'm thinking Mr. O'Malley.

Sadly, the only one of these nominees I've read is Gets It Together, so I'm hardly qualified to pick one here. I know that Exit Wounds was on all the cool critics' lists, and I've seen a lot of type devoted to Laika and The Arrival as well. The Duck book? I think it's mandatory for it to be nominated in every category, it or its creator. Publishers or interested parties, feel free to send me copies of the others so I can opine upon them here in this mostly public forum.

I actually own approximately none of these collections, but I can unequivocally state my high regard and extreme admiration for both Northwest Passage and The Damned V1.

Wait- where's the Gemstone selection? Thanks to the sainted Mrs. B, I do own the first two Peanuts collections, but that was some time ago. I'm sure, knowing what I know about all of these collected strips and comics, that you can't go wrong with any of them. If I had a vote, I'd be tempted to go with the Popeye collection, for entertainment value if nothing else. Again, publishers, feel free to send me any of these- as we all know, it hasn't truly been a success until Johnny Bacardi reviews it! (snort snort)

Ah, here's Comics Blogospehereiverse darling Moomin, its presumed delights still unsampled by yours truly. Yep, don't own any of these either. Why am I doing this again? I do know that Risso is aces, and again, everybody but me has read Exit Wounds and cited it on their "best of" lists.

As opposed to the usual award for humor, eh? Anyway, Gurewitch is gonna be hard to beat, even by O'Malley. The faux-Watterson stylings of Eliopoulous on Franklin Richards has tempted me once in a great while, but no soap, and it's great to see order restored to the Harveyverse with another Van Horn nomination.

Is there a best Off-line comic? Anyway, I'd bet on Gurewitch here, but never underestimate the Penny Arcade guys. Conspicuous by their absences: Girls With Slingshots, Wonderella, Brat-Halla, Lackadaisy Cats, Scary-Go-Round, Sinfest, Achewood, and Overcompensating.

I suppose this is a package design category; I own Super Spy, and have laid eyes on that Northwest Passage collection although I have yet to be able to afford to buy, so I guess I'll pass on passing judgment here.

I guess this is further proof of how far out of step I am with the current comics cognoscenti; I was underwhelmed by All-Star Superman #8, as well as Iron Fist #7. I flat-out didn't like Tek Jansen, although the art was fine. I've seen Sunderland discussed favorably here and there, as well as the Hitler book. The avalanche of Duck nominations continues, closely followed by noms for Cap.

I defy you to see that nom for the Overprice Street Guide and not snort in derision, although I do seem to recall (although it's been perhaps a decade since I've picked one up) that there are a fair amount of historical articles in every edition. Brevoort's blog is often interesting, although I must confess that I don't always click through to read it when it pops up on my Google Reader. The Journal keeps on keeping on, always readable I'm sure but never affordable for one of such meager means as I (and no, it's not because every time Deppey refuses to link to my reviews baby Jesus- well, actually baby Johnny B- cries). I am absolutely unfamiliar with the other two. No Duck or Cap noms!

All outstanding artists, although in Van Horn's case I'll just take their word he belongs; regardless, it's hard to beat Jean, who should just get an honorary award and be retired. Maybe they could name it the James Jean Best Cover Artist Award.

I'm curious- do all of these letterers hand letter, or do they just set type in InDesign or Photoshop (hope not- typesetting in PS is of the devil)? If not, doesn't that tarnish this award just a little? All of these fellows, at least the ones whose books I read, are excellent I suppose. Readable, anyway, and isn't that the true test of a letterer? Another Duck nom!

God, did Gemstone underwrite these awards? Anyway, of the non-Duck books I've read here, the only one in which the colors strike me as memorable is not the muddy imitation-Loughridge Vertigo-lite pallete of Hollingsworth or the sepia tones of Kindt, but Grant, who does more than color, unless I'm mistaken. Don't buy Thor, so I can't say for sure about Martin, who doesn't color any books that I buy, I don't think.

This list seems incomplete for some reason; if I thought hard about it I could probably name five that probably belong here instead of the workmanlike Leialoha, who is a far better illustrator (i.e., penciller, colorist, inker, on his own work) than he is tracing Buckingham's adequate pencils on Fables; Gaudiano, who is solid but unspectacular in his sloppy renderings over Mike Lark's pencils, and Nowlan, who's also thought of even more of a total illustrator, mostly on covers. I don't know Morales' work, and I've been remiss in noting how Kinney keeps popping up in many of these categories...someone must really have been impressed with Diary of a Wimpy Kid, probably those who think of themselves as former wimpy kids themselves. After having taken a look at the online strip, all I can say is Mike Esposito, Tom Palmer, Joe Sinnott, even good old Vince Colletta must be spinning in their graves or beds, whichever is applicable.

I've got a book somewhere of collected K Chronicles strips, I believe, the Lousville Courier-Journal carries Doonesbury, and the Bowling Green Daily News carries Fuzzy, and that's all I've seen of this bunch, although I think I've seen, and was unimpressed by, Mutts. Syndicated strips are mostly a dire bunch, for sure, as any glance at the Comics Curmudgeon site will prove...but is this the best they could come up with? Fuzzy is rarely as clever as it strives to be, and I was unimpressed by K, so I guess that leaves Trudeau's perennial, which at least has been on a minor uptick when it's not been on hiatus.

Same old same old here. Haven't read Cap or the last two, although like I said earlier I do have the Umbrella Academy trade coming, assuming DHL doesn't lose my box again. ASS was inconsistent, Daredevil is a well-executed slog...that leaves the outstanding Damned, which successfully mixes the crime and supernatural genres and entertained me thoroughly. I'm trying to get it in trades, so I haven't read the follow-up yet.

I'll probably spend some time going back through the Diary website, to read the pages and see what the fuss is about. The only one of these I've read was Resurrection, which I thought was just awful.

Rodriguez is a sleeper, I enjoyed Maintenance. Slade is an excellent illustrator working on what seemed to me to be a pointless book. I liked Lemire's GN, but not necessarily because if its somewhat crude art. I think I'd give the nod to Lolos here; Last Call had mood and atmosphere in spades and the art made it a lot more intriguing than its slightly used premise.

I got the first two Flight collections, but the combination of price point and lack of Vera Brosgol and Jen Wang art persuaded me to pass on the last two. Someday, when I hit the lottery, I'll buy every issue of Mome, Moomin, and Kramer's Ergot that I've passed up in my apparent ignorance and Philistinism. Until then, I guess I'll just observe that every other one of my comics criticism peers holds them in high regard, and be content in that knowledge. Guess what I'm trying to say in my roundabout way is that I haven't experienced the joys and delights of any of these nominees, unworthy infidel that I am.


And that, friends, concludes this little piece of comics blogging. Maybe I'll do more sooner rather than later!
Posted by Johnny Bacardi at 6/22/2008 08:31:00 AM