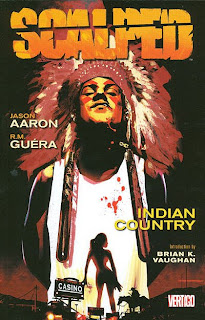 So I finally broke down and sampled SCALPED, Jason Aaron and R.M. Guera's ongoing Vertigo series set on a modern-day Native American reservation. I'll tell you up front: it's pretty darn good. It's a no-frills, unflinching, mature-audiences crime drama/action thriller that is informed by, but not completely dependent upon, its setting in order to be effective. The focus is, at first, on young buck Dashiell Bad Horse, born on the "rez", who was sent away by his mom in his early teens in order to get him away from the bad craziness engendered by her activities as part of a group of Native American activists in the mid-late 70's. 15 years later, Dash unexpectedly returns to the South Dakota reservation and begins working as a policeman for Chief Lincoln Red Crow, another former member of the group who has set himself up as king bad-ass of the area, with fingers in a number of unsavory crime-related pies. Having long ago decided to deal with the white man the only way they know how, he is masterminding the opening of an elaborate casino, in hopes of taking the money and turning it into a positive force for hope for the booze-and-drug ridden reservation. However, we find out early on that Dash Bad Horse is really now an FBI agent with a chip on his shoulder, who wants nothing to do with his mother or his former home but is being coerced into infiltrating Red Crow's operation by Special Agent Nitz, who was in on the investigation of federal agent murders committed by Red Crow and Mom Gina's group- while someone was convicted and sent up, Nitz doesn't feel like justice was served and is determined to get everyone involved all those years ago.

Complicated enough? Well, there are other subplots orbiting around, specifically Red Crow's daughter Carol, who is pretty much a drug abusing slut- married, but sleeping around with any number of lowlifes whenever the opportunity presents itself. She and our boy Dash, of course, were attracted to each other as kids but it didn't work out, and now Dash is obsessed with her, to the point of stalking her and beating up on her lowlife acquaintances. Eventually they do hook up, and the ramifications have yet to be explored. There's also Catcher, one of the original group who long ago succumbed to drink and despair but does seem to have the ability to have visions and see auras, enabling the dash of Native American mysticism that Aaron seems to want to be a part of the proceedings- at first reading, it seems to be an uncomfortable fit but the jury's still out and his still behind-the-scenes role has yet to make itself clear. Finally, a young man named Dino Poor Bear, who has been dealt a terrible hand in life, dealing with a deadbeat family including a crack-addled, pregnant wife and baby daughter, a broken down car which he desperately wants to fix, and a group of dumbass loser friends. He did get some unexpected luck from Dash Bad Horse, who caught him working as a gofer for a meth dealer and let him go. He also has a day job working for Red Crow at the new casino, of course, and his is another story which I'm sure will be a big part of wherever this is all going.

One thing I can't help but think as I read these first two collections is how much it reminds me of something you'd see on an HBO ongoing series- the obvious comparison is to The Sopranos, and there is certainly an influence there, but I'm also getting a strong Al Swearengen/Deadwood vibe from Chief Red Crow, who seems to be a ruthless, evil man on the surface but Aaron is working very hard to give him many dimensions and an air of someone who wants to be a difference maker, and acquired cynicism mixed with stubborn pride makes him not so choosy about how he achieves his goals. He's the center of the narrative so far; while the spotlight is on the conflicted and angry young Dash, everything that happens revolves around the machinations of Red Crow. And there are times when, as with David Milch's Swearengen, Aaron brings a Shakespearean gravity to the Chief, especially on up in the series when we begin to see that he realizes what he's become. While he's certainly the most vivid portrayal so far, all of the other players get their chances to make an impression; Dash's mom Gina (whom, it appears, is found dead at the end of the second collection) is as conflicted as her son, and lives with the guilt of what happened in the 70's incident with the Feds, but still harbors a deep hatred for the way her people have been treated. She wants to do the right thing, as much as she can, and in that she's a lot like Red Crow- and there are lots of hints and revelations yet to come, I'm sure, about her role with everyone in the group. One of the most affecting issues was, for me, #10, in which we spend a day with Dino Poor Bear and find out the depth of his situation. Via the Chief, in a surprising and engrossing turn of events, he acquires the means to achieve one of his goals, and his decision breaks your heart. Even though it was a one-shot issue involving a peripheral (at this stage, anyway) character, it was solid drama, one of the best in the run that I've read so far- and that's a really good sign as far as I'm concerned.

Artwise, Guera reminds me of at least a half-dozen different illustrators stylewise, sometimes on the same page, and that's a little distracting. But he manages to blend his influences skillfully, and he does a great job of staging the dramatics that Aaron gives him to depict. I can't say that he has a distinctive style per se, but he does tell the story well and with more panache than the usual run-of-the-mill artist that Vertigo decision-makers seem to favor. It's a grubby, sloppy style, well suited to the often squalid scenarios. The coloring tends to be a bit brighter than the usual dull greens, grays and browns of the Standard Vertigo Color Palette- there are some bright reds, yellows, and greens mixed in- but it still favors the monochromatic and the dark end of the spectrum, and often hinders Guera's already murky linework.

I'm at a big disadvantage when it comes to thinking critically about a work like this, which takes place in a setting and specifically about a people about which I don't know very much at all. I've not encountered too many full-blooded Native Americans, although I've certainly met my share of people who claim to be 1/32 Cherokee or something like that, and use that as an excuse to embrace a lifestyle about which they know very little beyond the most superficial aspects. I don't know if life on a typical reservation is as bleak as Aaron depicts it- a no-hope quagmire of drugs, drink and despair. I've heard that these conditions exist; but I don't know myself for sure. I don't know how much research Aaron did- is he part Native American? Does he have an extensive circle of friends who are and have told him firsthand accounts? Or is he giving us recycled tropes from Hollywood and TV crime drama, using received knowledge of what life is like for Indians on reservations throughout the US? Again, I just don't know. If Aaron is bluffing us, though, he's doing a very good job of it and Scalped feels legitimate.

Another thing I don't know is how well it's selling; the singles seem to be moving in unfortunately low numbers according to the charts I've seen since I became interested. of course, with Vertigo titles that doesn't always mean so much- if the trades sell well, then they tend to give them a longer leash. This all reminds a lot of the situation with The Losers a couple of years ago, a damn good book that nobody seemed to be reading or talking about much back when it could have made a difference, and those who were just couldn't understand why it wasn't more popular. I sincerely hope that Scalped won't share its fate; I think it deserves the audience it's just not getting. It's a down-to-earth, no-nonsense, unflinchingly mature and captivating work of dramatic fiction. It's not lighthearted or full of uplifting adventures. He's not reinventing the wheel, it's not particularly innovative, but he seems to have done his homework and the characters are all interesting. Perhaps it's just too grown-up for those who have to have their Wolverines and Batmans in everything they read, who knows. The likes of Garth Ennis and others have been singing its praises and encouraging people to, among other things, "blog about it"...and so here you are. I've blogged about it, and if you've been on the fence, I strongly encourage you to at least pick up the first trade.
Posted by Johnny Bacardi at 3/18/2008 10:18:00 AM