How about a couple of in-between shipments comics reviews? 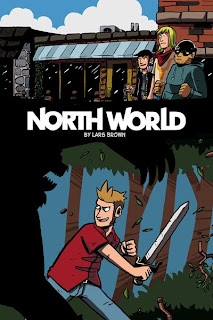 The first thing I thought of before I read Oni's NORTH WORLD vol. 1 trade was, "Oh, boy- the inevitable Scott Pilgrim imitators have begun". But, as I find so often is the case, I was incorrect in my assumption. Sure, the Pilgrim vibe is there, with its often-sudden juxtaposition of fantasy and real-world scenarios- but after I had finished it, I realized it wasn't so much like Bryan Lee O'Malley's brainchild as it was Grosse Point Blank meets Dungeons and Dragons with Link from the Zelda games in Martin Blank's place. In North World, disaffected young man leaves his small home town and seeks his fortune and fame out in the world as a warrior, one of many who combat the multitudes of supernatural menaces that apparently plague the world they all live in. Other than that, everything's pretty much down-to-earth- but since there be monsters, then there needs to be monster fighters. Anyway, our protagonist Conrad's next assignment is to return to the hometown he left under less-than-ideal circumstances, ostensibly to root out a malevolent resident who plans to summon a world-destroying demon. But Conrad has to face something even more daunting- the girl he left behind is getting married, and has invited him to the wedding! Anyway, he returns, and is reunited with all kinds of people who he knew growing up, including his father (there are issues, of course), a best friend, the girlfriend, and more- and the longer he mingles with and blends in to the small town family values, the more he begins to doubt his "monster fighter for hire" career choice (he had already shown some reservations from the beginning) and wish for the more sedate charms of the settled-down life he left behind.

See? Just like Grosse Point Blank! But derivative as it may be, writer/artist Lars Brown does a good job of making Conrad interesting, if not always likable, and the cast he surrounds him with are varied, not too terribly stereotyped, and keep the weird-assed concept grounded. Brown's art style isn't especially impressive; it tells the story well enough but it's a bit on the crude side; perfectly fine for a webcomic, but if you're gonna kill trees one should hope for better. Anyway, it's good enough. This volume ends rather abruptly, without resolving anything- in fact, the website hasn't even gotten as far as the book, so goodness knows when we'll see the ending, and that's a bit annoying. Still, I'm mildly interested in how it turns out, so I guess I'll try to follow as best I can. North World isn't anything exceptional; it's just like Shoe Shine Boy, it's "humble and lovable". And if you like your Zelda peanut butter in your Blank chocolate, you might enjoy this. B 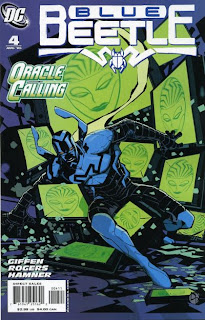 My patience with superhero highjinks is stretched pretty thin these days, what with the glum, tiresome continuity-heavy ongoing serials both of the Big Two have been foisting on us for two years now...so it seems I'm missing out on a lot of titles that a select few people are talking up, like The Twelve, All-New Atom, and BLUE BEETLE. Finally, after being a bit curious after all the positive word-of-mouth, I ran across that rarest of rare things, an unbroken run of the first 16 issues at my former local comics shop (I can't tell you how many times I've been interested in a recent series, gone there to look for back issues, and found something like issues 1, 4-7, 9 and 12)- so I pounced and bought the first six, figuring that would be a good sampler. Written by the usually always reliable Keith Giffen, or (I think) more accurately plotted by same with John Rogers (I'm guessing) providing dialogue, #1 doesn't exactly get off on the right foot by throwing us right in the deep end, giving us the new Beetle brawling with Guy Gardner, apparently in the aftermath of some big-whoop cosmic battle that was raging in 2006's DC books. Now Dave, I can hear you saying, if only you'd toed the line and bought all those Infinity Crisis/Countdown/52 etc. megawhammy crossover event comics, you'd know what happened! But I regret nothing, so save it. Anyway, Guy is pissed, for no good reason, and we learn that the occupant of this Beetle armor, young Latino Jamie Reyes, doesn't have any idea how to use this armor and the little mechanical scarab that is the facilitator of all this, and gets protetced/saved pretty much by accident. After that's resolved, we see that Giffen and Rogers are pretty much following the standard DC Classic Character Revamp Template; that is, reluctant young average guy acquires Object of Great Power, doesn't know how to use it to its fullest capabilities, and spends a great many pages and our dollars learning as he goes. I think this dates back to James Robinson's Starman, one of the first replacing-outmoded-classic-DC-superhero-with-young-son/daughter/cousin/innocent bystander character overhauls (although I'm sure someone can dig up an earlier example), and still the best of all of them. We meet Jamie's parents, friends, and learn his situation, and of course other DCU characters are interested in who he is and what his intentions are. #4 features an amusing scenario of Oracle, DC's resident omnipresent computer communicator, approaching Jamie and being given a curt dismissal; the Phantom Stranger (as in issues of the Jared Stevens Fate title) also pokes his nose in. Really, this is a tried-and-true method, I suppose; the writers make Jamie and his cast as interesting and as likable as they can, and up the ante by establishing an outsider group of apparently homeless teens with special abilities called "The Posse", obviously missing the member with the special ability to choose a cool name. He discovers, to his dismay, that he has been gone on that mission in space for a year, and much has changed, which also propels the plot forward.

Even though it all sounds a bit...involved..., it goes by pretty quickly, rarely dull. The dialogue sometimes threw me; I found myself rereading pages, trying to ascertain who was addressing who, and Rogers' attempts to replicate the patois often sounded awkward to my ears. Or read awkward to my eyes. Whatever. Bear in mind that I've only read the first half dozen issues, and he may have hit his writing stride by now. I understand that he's taking a leave of absence from the book right now, but I'm nowhere close to that in my reading just yet.

Artwise, beginning with Cully Hamner in the first three out of four issues, and a rotating group after, the art stays really close to that Humberto Ramos (#5's Duncan Rouleau inked Ramos and eventually did all art chores on Impulse if memory serves) kinda-sorta manga style that's so popular with the kids these days. You've seen it everywhere, by a hundred thousand artists working right now. It's certainly dynamic for the most part, especially (unsurprisingly) in the action scenes.

It's probably best to withhold judgment on the series as a whole until I get closer to being caught up- things that bug me now may get resolved six issues later. I am intrigued enough to perhaps go back and get the issues I don't have, or even more likely the second and third trade collections, cheaper in the long run. I'll give this a B+ for now, and I'll revisit when I get caught up to speed.
Posted by Johnny Bacardi at 3/28/2008 02:05:00 PM