I've been reading a couple of interesting webcomics lately, and I thought I'd write a word or two about them. Neither are, I'm sure, particularly new to those in the know, but you never know, so whaddaya know, y'know? 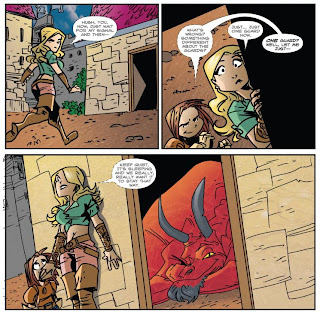 Here's BRAT-HALLA, by Jeffrey Stevenson, Seth Damoose (relation of Mister Damoose, I wonder?), and Anthony Lee. The concept is the adventures of the Norse Gods when they were young and if their parents were living a modern-day suburban-type lifestyle. I haven't gone very far back in the archives yet- the darn thing's been appearing since 2003, completely under my radar- but the year or so I have read has been fun. It's an enjoyable, often clever read and I find myself really liking the Damoose' art- it's a loosey-goosey blend of Mark Badger, Darwyn Cooke, and dare I say I see a little John Byrne in there as well? It's very expressive and appealing. Click on the above link to go back as far as August 2006, and here's an archive of earlier strips. 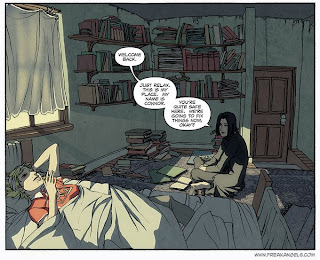 The other one, on the other hand, is quite familiar, I'm sure, to all of you (unless you've been vacationing in Aborigine country or something): Warren Ellis' FREAKANGELS. The best way I can think of to describe it is The Midwich Cuckoos all grown up and devoted to the Coilhouse aesthetic. Unlike many of Ellis' recent projects, it doesn't come across as extrapolations on the notes he makes while perusing Metafilter, Boing Boing and Slashdot, and the situation and characters he's set up early on are interesting. His art collaborator Paul Duffield's art is fine; a little sketchy and too much on the inked-in-Photoshop side but it tells the story efficiently, and he's good enough with PS to flesh it out more in the final stages.
Posted by Johnny Bacardi at 3/14/2008 08:38:00 AM

Email ThisBlogThis!Share to TwitterShare to FacebookShare to Pinterest
Labels: webcomics