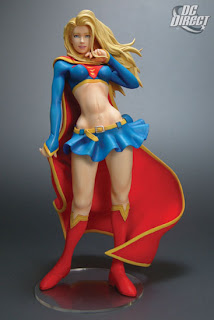 Placing my neck firmly on the chopping block, and reminding the executioner that I am no fan of DC's current take on the character, I would like to state for the record that at least this rendition is at least more anatomically realistic, better-proportioned if you will, that practically any of the pages I've seen from the comic or this awful thing: 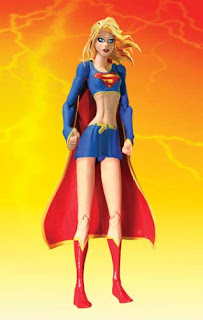 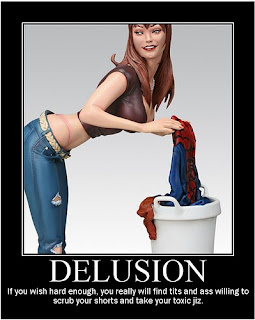 Now, it's the Mary Jane washes Spidey's uni statue that's got folks bent out of shape, even more so than MJ's somewhat uncomfortable looking stance as shown. Now don't get me wrong, I certainly understand the dismay that many have expressed at the sight of this statue/maquette/whateveryacallit. But honestly, I've seen worse- this is cloying and cutesy, adolescently smirky and pandering, but as someone who has been known to enjoy what the cavemen referred to as "good girl art", it just doesn't seem worth getting worked up about somehow when there are more egregious targets out there. Frankly, I worry more about the people who greenlight this sort of thing, and the presumed audience for it, than any long-term effect on the perception of women in the world of comics. For what it's worth, here's one of the most rational con- arguments I've run across so far. And here's one of the funniest.

I finally found a link to the original Adam Hughes sketch that this is based on (shoulda known that Dean Trippe would be on the ball with that one...), and, well...it's not exactly one of Hughes' finest moments. I have always had a lot of love for Adam's work, and still consider him a favorite, but that pose is every bit as contorted as the statue turned out. The sketch fares better in the facial expression department, but that is, again, an awfully cutesy and smirky concept in the first place, and by now Hughes should know better than this. But we all know that money talks and bullshit designs objectionable collectibles.

A question: yeah, she's barefoot. As in "...and pregnant." But, honestly, don't any of you who are outraged by this trinket go barefoot in your own homes and apartments, without fear of someone thinking you are demeaning yourself? Sure, there is much to object about with this thing, but I think getting upset because she is handwashing laundry sans shoes really comes across as a stretch.

But then again, I have been known to be wrong before.

Oh, and I have been remiss: the "Delusion" image above is one of three and was ganked from the LJ of Lisa Jonte. Apologies all around for my oversight, and gracias to Lea for bringing it to my attention.