I'm sure you've seen it everywhere else by now, but since I'm all about the "me too" here's the all-new, all-healthy, non-Mary Kate Olsen-based Supergirl! And that sound you're hearing? It's the collective moans, sighs, and head scratching of all the fanboys who prefer last year's model. I gotta say for the record, though, that if I was gonna buy a Supergirl comic, (or heck, any kind of comic) then it would be one illustrated by this artist, the previously-unknown-to-me Renato Guedes. A little selective Googling has revealed unto me that Guedes does have a website, and it's right here. Try to remember you saw it here first, when you see it at other, more popular, websites like the Beat and Journalista. For more of these excellent SG sketches, here's the Pulse article where I saw them last night.

But. And like Pee-Wee Herman says in the deathless classic Pee-Wee's Big Adventure, "Everybody I know has got a big "but"." As good and as correct as this approach is, do I think this new take will be a success? I wish I could say "yes"...but there must have been a reason why the previous one did as well as it did, and please don't give me the rampant misogyny rationale. I just don't see the Fanboy Legion out there, all jacked up on Shonen Jump and Mountain Dew, embracing this girl-next-door SG. As presented here, she's not edgy, not exciting, not "kewl", unless of course you've been hoping that DC would scrap that lowbrow approach. Guess we'll see what we will see! Perhaps that most coveted of demographics, young female girl-type persons, will now be willing to pick up an issue or two, since they've obviously been frightened away all this time by Miss Anorexia Kryptonia. Kudos to DC for at least giving it a shot.

Before I sign this thing off, and apropos of absolutely nothing, here's a great 1983 Killraven illustration (from the Marvel Graphic Novel) by Craig Russell, which I found over at Lurid.com. I just wanted to share. Ta for now. 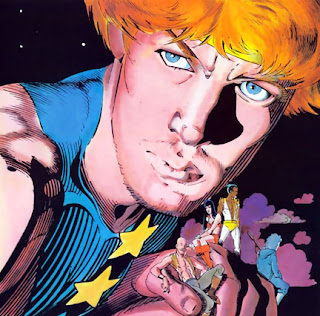