Just so you don't think I've died or something- and I am in the middle of writing comics reviews- here's a couple of crossposted LJ entries: 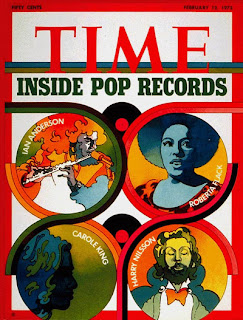 Meant to post this weeks ago- Harry Nilsson on the cover of Time magazine! Ian Anderson, too! Click to see it all biggerer. 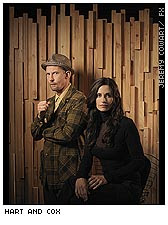 Well, Studio 60 certainly turned out to be a disaster after a strong start, but I've found myself getting into something else lately: FX's Dirt ! At first it's because Ian Hart, who played John Lennon superbly in Backbeat, was in it and I wanted to see what sort of paces they were putting him through. And he's good, of course, in an odd role but I found myself amused by the sheer trashiness of the show, as befits the subject matter I suppose- nobody in this thing has any redeeming qualities whatsoever, except Hart's faithful photog, and he's such a nutjob that it's really hard to tell where he's coming from when he's being nice. Hell, when your most personable character is a drunk ex-newspaperman played by Pee Wee Herman, and the most sympathetic one starts puking worms at odd times, you know something very skewed is going on. It's pretty racy for a non-pay cable network show, too; lotsa bare buttocks and we even see dildos and a fetish mask under a character's bed in tonight's episode.

I think what I like the most is that making these characters likeable doesn't really seem to be a priority- I can't speak for anyone else, but nine times out of ten I have little patience for films and TV that have nothing but unpleasant people doing and saying unpleasant things to each other; it gets wearisome trying to work up any sympathy or empathy. But these characters are unpleasant with relish, and while I suppose it's splitting hairs I find myself fascinated by all the wallowing, in spite of my better judgement, and have suddenly found myself really interested in where this is all going- as opposed to Studio 60, which squandered a good cast (even the horribly miscast Sarah Paulsen, whom I've liked in other shows) desperately bending over backwards to give the increasingly disinterested audiences something to relate to. FX being the smallish network it is, apparently wants to be liked on its own terms with this show, and ta heck with ya if you don't. I don't think ratings have been that great, but then again I don't know what constitutes "great" for a network like FX anyway. I'm sure we'll at least get to see the season finale on March 27, which promises (in tried-and-true tabloid style) a kiss between star Courteney Cox and Jennifer Aniston. And if the episodes I've watched are any indication, betcha there will be tongue, too!
Posted by Johnny Bacardi at 2/21/2007 07:06:00 AM