Time now for some catch-up reviews.

AMERICAN BORN CHINESE (Gene Yang, First Second, $16.95) started out its life as a webcomic, which I remember checking out quite some time ago- and at about that same time, I read where it was going to be collected so I figured I'd read it all in one sitting sometime down the road. It's been getting mountains of praise and recognition, too, including a National Book Award nomination. So, now that I've finally read it in its entirety, what do I think? Well...I think that sometimes because someone can do something doesn't always mean they should do something. And I'll elaborate on that later.

ABC has three parallel storylines: First, we get folklore in the form of an account of the Monkey King, who was looked down upon by the other Gods because he was a monkey and who set out to become the most powerful being possible so the others would respect him...but it isn't until he learns to be proud of what he really is, spiritually as well as magically and strength-wise, that he is able to progress as a complete "person". Second, we meet Jin Wang, (a slightly rearranged version of the author's name, although I found myself wondering what Jen Wang thought about that) who is dealing with growing up as one of only three Asian-American students in his school system, and the attendant prejudices, misconceptions and hostility that it encompasses. His best friend is Wei-Chen Sun, a nerdly little fella with big round glasses, who Jin doesn't cotton to at first but soon they become pals. Most of this storyline deals with Jin's troubles with fitting in and girls, and of course it isn't until he learns to be comfortable in his own skin that he is able to find enlightenment. Beginning to notice a trend here? Finally, the third tale is a broad, sitcom-themed account of a young Caucasian fellow named Danny who has to deal with his embarrassing cousin Chin-kee, who is a cartoonish amalgam of every wince-inducing Oriental stereotype you can name, and it's treated in true Saved By the Bell fashion.

I'm going along, enjoying the well-done Monkey King retelling, finding myself hoping for the best for the well-meaning but muddleheaded Jin, and tolerating the Chin-kee stuff (with an occasional couldn't-help-myself giggle- does that make me a bad person?) until we get to the ending, and the point where the three interspersed story threads intersect at the end...and therein lies the rub, at least for me. Yang blends all three together literally, introducing the fantasy elements of the Monkey King and Chin-Kee threads into the mostly mundane and straightforward (and after all is said and done, the most compelling and interesting for me) storyline, and by doing so, completely lost me. And I SPOIL HERE, so MOVE ON IF YOU DON"T WANT TO BE SPOILED! This isn't the first time, I know, that a writer has blended fantasy and reality in order to make his overarching point...but I just question its necessity here because he had a pretty good thing going by keeping the second narrative grounded in reality...and revealing Wei-Chen to be the son of the Monkey King, and the M.K. himself coming down to guide Jin towards self-acceptance by posing as Chin-Kee and enabling Jin to shed his self-created glamour of "Danny" and be content to be who he really is, well, it somewhat trivialized his message as far as I was concerned, and that's why I say that just because you CAN do something in a graphic novel (i.e., the blending of the unreal and real, easier to do and done more often, even expected ofttimes in sequential fiction, as opposed to film or television) or comics story, whatever, doesn't mean that you SHOULD do it. Of course, the "message" in question is a personal thing as far as the author is concerned, and fair enough, but I just felt like he diluted what he was trying to say...and he didn't have to. I think his purpose would have been served just as well if he had stuck with the Jin narrative all the way through. SPOILER OVER!

This thing is running a lot longer than I had hoped, so I won't be able to deal with the art as much as I'd like to, but I will say that a big part of the appeal that ABC holds for me is visual- Yang's work is nuanced, simplistic at first glance with a LOT of open space, but he has a nice sense of composition, a deft inkline, and does expressions very well in this deceptively simplistic style. The coloring throughout is beautiful, especially the oranges and yellows of the cover and the contrast of more subdued tones in the body of the story itself. There's a lot to like about American Born Chinese...I just wish the author had trusted in his message more and hadn't felt it necessary to gimmick it up. B+ 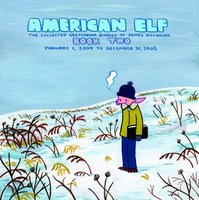 AMERICAN ELF (BOOK 2) (S/A: James Kochalka; Top Shelf, $19.95, reviewed from CD/PDF) is the latest collection of Kochalka's "daily diary" type comics strips. Lots of folks (well, not "lots", but several) do this sort of thing, but nobody, unsurprisingly, does them as well as the idiosyncratic Kochalka. As usual with this type of strip collection, I have to read them in short bursts or they begin to run together- which 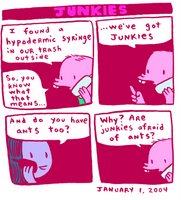 is not to say that they aren't amusing or interesting. Most of these deal with life's little pleasures, as run through the skewed Kochalka filter: parenting, work, relationships, off-kilter observations, groaning puns, etc.; a example is at left. Whether or not you'll want this depends on how attuned you are to JK's previous efforts; me I love Superf*ckers and have enjoyed the rest, so I'm among the converted, but others may find this precious to a fault and get bored quickly. A-

Continuing with our "daily diary" trend, we come to Serbia, which is a collection of those type of strips done by Serbian cartoonist Zograf, detailing his life among the constant strife and struggle of the Balkan War. Which is not to say that it's a constant parade of panels depicting Zograf huddled in a corner as things explode all around him; he manages to contrast the effects of the conflict with the ordinary life concerns that continue in spite of everything, and does so with a subtle sense of humor and an imaginative cartooning style which looked kinda crude and unpolished at first glance, but soon revealed itself as darkly expressionistic, even oppressive when needs be- but also capable of a quirky playfulness when necessary. It's a nice blend of writer and artist, and if I was going to do an illustrated Kafka, he would be on my short list of illustrators. I'm not the most political creature in the world, and I must admit to being (sadly) somewhat uninterested in the subject matter, but Zograf held my interest for most of the 200 plus page count, and that's no mean feat. If you're not as shallow and self-centered as I, especially when it comes to world politics, you should check this out- it's definitely worth your while. B+

And now we move on to, that's right, you guessed it- daily diary comics! This time it's Brown, who once again essays his relationship problems and wry observations on life, religion, and such and draws it all up with his loose, crude style for our reading enjoyment. As with Kochalka's efforts, it's completely idiosyncratic; if you appreciate Brown's sense of humor and whimsical forthrightness, then you'll like this (much of which is reprinted from places like Project: Superior- which I never got around to reviewing, now that I think of it), and if you don't, you should steer clear. B+

And now we come full circle. No, this isn't a collection of "daily diary" strips, but it shares something in common with the first book I've commented on above, that is, an engrossing story, somewhat autobiographical (I suspect, although it's not explicitly stated anywhere) and saddled with a tacked-on-feeling fantasy ending that works better than it probably should. Farm is an account of 10-year-old Lester, recently orphaned, who goes to live with his uncle on his uncle's farm. Of course, they don't quite get along, and the hockey-and-superhero loving Lester soon strikes up a friendship with the town's gas station owner Jimmy LeBeuf, who played for a brief time in the NHL before he got a career-killing injury which apparently left him kinda brain-damaged. Jimmy kinda becomes a big-brother type to the boy, encouraging his fantasies of being a superhero who defends the earth against aliens, playing hockey with him on a frozen pond, all the things that his well-meaning but distant uncle doesn't have time to do. Uncle Kenny doesn't completely trust Jimmy, especially when it seems that the big lug is introducing him to smoking and swearing and inspiring intense hero-worship in his nephew. All the dramatics are handled very well, without lapsing into soap opera cliches, and Lemire's loose-and-sloppy art turns out to be quite capable of illustrating the conflicting moods and emotions the story demands. Unlike American Born Chinese, Lemire indulges himself in his little fantasy scenario (to show Lester letting go of his hero worship) but has the smarts to bring his reality-based tale back to the "real world" for the ending. Farm isn't something that I would ordinarily seek out, Philistine that I am in my reading interests, but it is a evocatively-drawn and solid character-driven story, and I think that most discriminating readers would find it worth the ten bucks. A-
Posted by Johnny Bacardi at 12/30/2006 08:36:00 AM