Seems like 3/4 of the readers who care out there in the comics blogosphereiverse have an axe to grind with Brian Bendis, because of some of the changes and twists he's put many of Marvel's characters through, but until now I haven't really shared that viewpoint. Frankly, none of the characters that he's messed with have interested me much since the late 1960's, so my attitude has been "whatever". But now, as I mentioned in my post the other day, they took a character that I liked a lot from the late 90's-early 00's and pretty much ruined her for the future, for no good reason other than apparently the writer in question (as well as whatever passes for editorial at Marvel these days) had no use for her. I'm referring to Bendis here, and the character is the one on the left in that comic book cover- Yelena Belova, the second Black Widow. Scroll down about halfway through the Wikipedia entry for the Black Widow for an intro.

I enjoyed the three miniseries that featured her as well as her longer-tenured namesake: the 1999 and 2001 Black Widows and Yelena's 2002 solo turn, the often squicky but no less engrossingly gnarly Pale Little Spider. Moreso than the often distant and icy Natasha Romanoff, Yelena was an often vulnerable and sympathetic young lady who was often conflicted about her place in the scheme of things, understandably carrying around a bit of an inferiority complex regarding her predecessor, as well as the whole spy-making machinery in place in post-Communism Russia. Still, she was also super-deadly and super-efficient, and I found her a heck of a lot more interesting than Natasha, who has had three decades worth of Marvel writers' bullshit baggage to carry around. The new Widow was a clean slate of sorts, and all sorts of things could have been done with her in the hands of a writer who had the imagination and the chops to do so. But not anymore!

Apparently, at some point this year (after a period of disuse) she was stuck into Bendis and Olivier Coipel (gee, I still miss his Legion; haven't bought a thing he's drawn since)'s New Avengers Annual #1, which also featured the marraige of Luke Cage and the Jessica Jones character...and since these sorts of stories always have to have a super-villain in them, it fell to Bendis to provide one. He chose Yelena. And here's what he did, courtesy of the Wiki entry:

Belova is genetically altered by the terrorist organization HYDRA. Now equipped with the ability to copy all of the Avengers powers (see Super-Adaptoid), she engaged the superhero team in combat. She was eventually defeated by a combination of Tony Stark's 49 successive Iron Man armors - from the first, Tales of Suspense #39, to the then-current - and the Sentry's use of his Void persona, which she absorbed with the rest of the Sentry's powers and energy. When she was defeated, HYDRA killed her using a self-destruct mechanism they had implanted in her.

Christ on a crutch. What bullshit. What a waste. You want the fucking Super-Adaptoid? Sure, fine. Why not come up with another android? It would fit the bill just as well! Create someone to become the creature! Think! Write! Come up with a more interesting person to fit the bill, and not some readymade recyclable! But no. And now, unless she's revived through even more contrived comics bullshit, she's dead and gone and no one will use her in a story again, for good or ill. I just don't understand why this was necessary, that's all. Perhaps it's because creators Paul Jenkins and Devin Grayson (and Pale writer Greg Rucka) weren't around to complain or couldn't care less either, who knows.

And if this makes me sound a bit Alex Ross-ish, well, I don't mean to. Sure, Obsidian being gay probably isn't what Roy Thomas had in mind when he created him, but Andreyko's portrayal is a solid, logical and non-exploitative one, and it isn't like he was genetically transformed into some sort of batwinged werebeast with power-absorbing abilities, then disintegrated! Yelena's final fate is not a fitting one, and it is just the sort of smirking, dismissive and shortsighted plot twist that seems to be Bendis' opus moderandi on everything except Powers and most of his stint on Daredevil. Hell, life goes on and I won't lose a single minute of sleep over this...but this is a sad, pathetic waste and I just felt like bitching about it.

Yelena Belova, before and after. 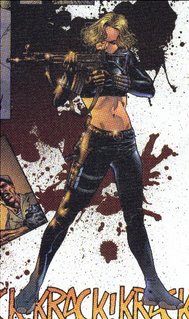