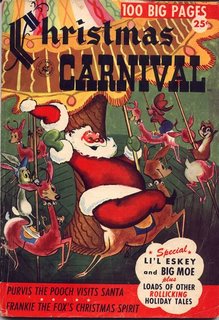 Here we are again- Christmas Eve.

Everybody and their grandmother is posting Christmas-themed comic book covers, and looks like I'm no exception. I would love to cobble something personal together, but y'see, my iMac with all the graphics software is behind me, covered with boxes and stuff piled up all around it so I can't get to it to create, and I sure as heck don't have time to do it at work! I'm writing this on Mrs. B.'s Dell, by the way. So anyway, I found this, which I don't remember seeing anywhere else but I admit that my memory may be faulty. And what this appears to be is Santa having a jolly old time on a carousel, which is made up of his reindeer, who have apparently been skewered on poles! And alive, too, if the winking reindeer behind the Claus is any indication! Is this an EC comic, by some chance? Perhaps this is at the urging of his animal buddies, who are sharing the ride...who knows. Perhaps there is some sort of ancient blood feud between the Raccoon and rabbit clan and the Reindeer clan and they have struck a deal with Der Kringle. The possibilities are endless! I think many of these artists who drew these things back in the 40s and 50s were smoking those "herbal jazz" cigarettes (phrase origin: Paul McCartney, from the Beatles Anthology) along with their Parliaments and Lucky Strikes. 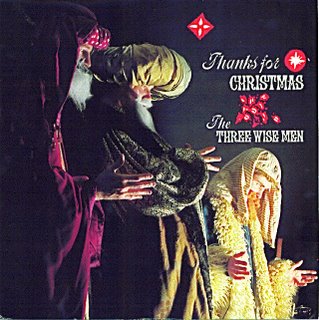 And here's a great 45 cover (you remember 45s, don't you?) from none other than XTC, who released a seasonal single called "Thanks for Christmas" back in 1983 under the nom de plume "The Three Wise Men". I've been enjoying this song for several weeks now (it's included on their odds-and-sods collection Rag and Bone Buffet, which is the first place I heard it several years ago), since I placed it on my MySpace page. You can go there to hear it, but I'll be taking it off before the week's over so hurry!


Anyways, from all of me to all of you, here's wishing you all the hap-hap-happiest Christmas since Bing Crosby tap-danced with Danny Kaye! 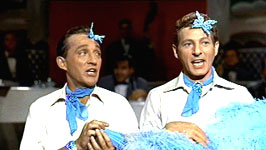