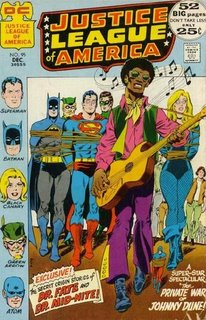 Hello, everybody! Hope you had a great Christmas. Mine was great, from a material standpoint anyway.

I fully intend to get some actual content up here soon, too; I still have reviews of four upcoming (by the time I finally get around to writing bout them, they might have already come out if I'm not careful) Top Shelf releases coming, as well as the eagerly anticipated (I'm sure, right? Right? Bueller?) Bacardi Show Best of 2006 in Comics post. Plus, I'm getting a new comics box from DCBS sometime this week, hopefully Friday, but it will probably be Monday thanks to the holidays. We'll see.

Anyway, just wanted to post something, and perhaps this fits the bill: this is the cover to Justice League of America #95, "The Private War of Johnny Dune", cover dated December 1971. Cover by Neal Adams and Murphy Anderson, lead story by Mike Friedrich and the late great Dick Dillin. This is one of the first DC Comics that I recall seeing on the spinner rack at the Ben Franklin Five and Dime in beautiful downtown Horse Cave. Throughout the 60's (and probably long before that as well) the BF 5&D had stocked Dell/Gold Key comics, and I was quite surprised to see National publications in their place. So I probably begged my Mom for a quarter, and took this home. I wish I could tell you that I vividly remember the story, but I don't- it was another of DC's early attempts to be all relevant, with the titular character as some sort of Hendrix-ish mind-control guy. I think. Anyways, I believe that I remember the two reprints better- one was the origin of the Golden Age Dr. Mid-Nite, and the other was the origin of Dr. Fate- and for a while there, I was a big fan of those GA Doc Fate stories, with its weirdly calm and stiff art by Howard Sherman. I liked the character a lot more in that incarnation than in all his subesquent appearances, save for the Marty Pasko/Walt Simonson take in First Issue Special, which was certainly the best post-GA Fate tale I personally ever read.

Has anybody else read this issue of JLA, and can you refresh my memory about the lead story? Well, OK, here's a synopsis. But has this character, Stevie Wonder lookalike Johnny Dune, ever returned?
Posted by Johnny Bacardi at 12/27/2006 08:17:00 PM