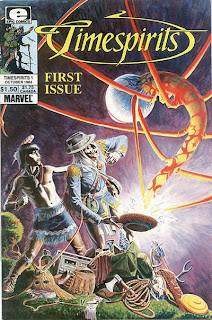 Reading the recent news about Marvel's relaunch of its Epic imprint put me in mind of one of my favorite comics series, which came out as part of that line in the 80s...Timespirits.

Timespirits was co-created by scripter Stephen Perry (no, not the Journey singer) and illustrated by Tom Yeates, fresh from his stint on Swamp Thing pre-Alan Moore. It was perhaps the best and most sympathetic treatment of Native American characters in comics ever. Difficult to sum up in a nutshell, it was an imaginative, quirky, warm and winning blend of religion, Native American legend, science fiction and high fantasy which never took itself too seriously and is sorely missed, at least by me.

At its basic level, it's about the time-traveling adventures of Cusick of the Tuscarora, an aged Native American "Time Spirit", sporting a fedora, backpack, hiking boots and Sgt. Pepper jacket who functions like an extradimensional Monty Hall– he trades strange and powerful items for souls, which he collects in a turtle shell until he can release them into the afterlife. It is in one of these transactions, in issue #1 above, that he meets teenage Doot of the Wawenoc tribe in the early days of the pre-Revolutionary War American colonies. Doot's brother, Three Birds, wishes revenge on the white man for the slaughter of his village. Cusick, hearing this wish expressed aloud, appears to him and offers him a strange creature called a Bloodless Ghebe, which will enable the Chief to rout the white man from his land forever. The Ghebe, which resembles a walking stick insect with a big eyeball in place of a head, enter's Three Birds' brain, gives him incredible strength, and enables him to fire a destructive beam from his right eye, which has been replaced by the Ghebe. It also drives him quite insane. Three Birds goes on a murder spree, uniting the tribes against the white man. In the meantime, Cusick strikes up an acquaintance with Three Birds' younger brother and recognizes him as a potential Timespirit of great power. Doot, who loved his brother and did not understand what had caused his formerly pacifistic sibling to change so, wishes to stop the rampage and kill the Ghebe, which eventually sheds Three Birds' skin like a snake. It's too late to save Three Birds' physical self, but Doot is able to save his spirit and destroy the Ghebe using his nascent abilities, and takes his brothers' soul into himself. Cusick offers to take the young brave under his wing and teach him to utilize his potential as a shaman. It's a fine adventure yarn, in a time period that isn't depicted all that often, especially in comics, with a very touching ending.

Issues 2 & 3, arguably the zenith of the entire run, has a plot which is almost too gnarly to describe succinctly. Titled "The Blacksack of King Ogam", it involves dying magicians, unrequited love, spoiled princesses, bands of Norsemen, a spiteful talking fish which came closest to being an arch-enemy of the 'Spirits, a massive octopus-like creature called the Spurtyn Duyvel which is summoned up by a rejected, hate-filled amateur prince/magician with the aid of the fish, a magic bag which is literally bottomless, Stonehenge, Noah from the Bible, and much more. It works on a number of different levels– as heroic, pulp-type fantasy, as a romance, and as a cautionary fable. If you never read any other issues of TS, get these two.

Issue four was a Christmas-themed one, with Cusick facing an uber-vamp named Varnae and eventually delivering an object called the Crystal Skull to the Christ child. It also featured fill-in art by Al Williamson, Steve Bissette (Yeates inks), John Totleben (inking Yeates), and Rick Veitch. #'s 5 and 6 was another continued story, this one mixing a dystopian future and some commentary on the state of music vs. big business with the ghost of Jimi Hendrix and in #6 taking it up a notch, mixing in some anti-US government's involvement in Nicaragua (this was 1985, you know) statements, with Yeates taking the opportunity to let his feelings be known in the matter. Mildly controversial at the time, as I recall, and both Yeates and Marvel took some shots, but these two issues were the weakest in the series because the message kinda got watered down and the whole storyline became a bit incoherent as a result. The final two issues, 7 & 8, got back to the original idea of what the 'Spirits were and what they did, with Cusick taking Doot to Tibet to meet the High Lama and to release the souls they have accumulated over the course of their recent adventuring. Problem is, the talking fish again has made a jealous and hate-filled Yeti on the mountain aware of what he needs to do to inhabit the body of the High Lama and become all-powerful. The enlightened yeti chops off his hand, which becomes a totem that facilitates the body switch and transforms the former beast into a malevolent, spirit-eating monster, laying in wait for our pair as they climb the mountain to the Lama's home. The storyline ends with surprising and somewhat tragic results, and the final page of #8 is a literal curtain call of all the characters that have appeared in the previous issues, and they all come out with one puzzling exception. It was a charming and clever way to end the series.

If Perry has done any comics series since Timespirits, I'm unaware of them. I do think he's made a name for himself as a writer of Star Wars novels; at least I think it's him because he's left it off his online resume. Yeates mostly went on to illustrate a few issues of Zorro for Topps with Don McGregor, does a lot of ERB-related work, and still does the occasional job for DC and Marvel. The Tomahawk one-shot Vertigo Visions he did in the mid-90s was especially nice, and reminded me a little of Timespirits. I did email Yeates a while ago and ask him if he had any 'Spirits pages for sale, but he said he didn't want to let any of them go...obviously this book meant a lot to him.

Somehow, from the look of what they're soliciting so far for the new Epic line, I don't think there will be room for a series as unassuming, yet intricate, as Timespirits. Too bad...I think there were a lot more stories yet to tell about Doot and Cusick.
Posted by Johnny Bacardi at 3/31/2003 12:21:00 PM