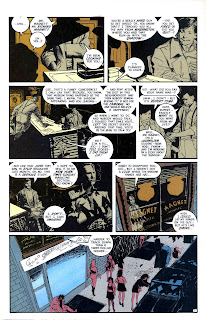 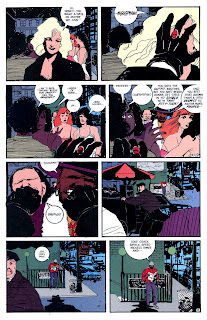 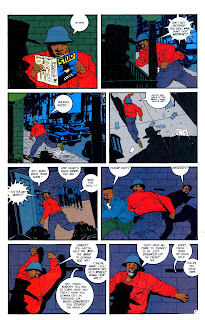 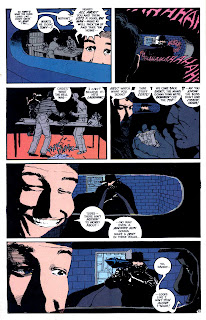 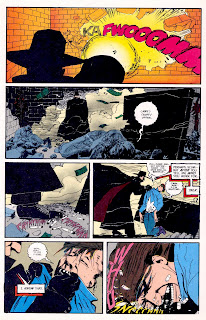 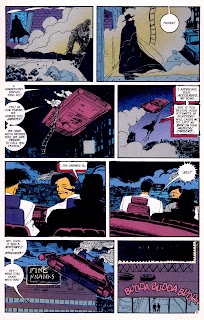 OK, I'm sure you all remember the apocalyptic fall of scans_daily, the repercussions of which are still reverberating throughout the Blogosphereiverse to this day, especially if you subscribe to certain Twitterers. Now, you all know that I was up front about my VERY infrequent participation on that infamous LJ site, and as fate would have it I had just posted something there only a few days before the axe fell. And that would be what you see up above- a few pages from the first Andy Helfer/Kyle Baker Shadow. I had been wanting to share it since I stumbled upon scans from that equally-infamous mid-late 80's take on the original Man in Black (or, as Percy Jenifah, introduced a few issues later, would say: "De Mon in Block"), so that's the venue I chose. Then, boom went the dynamite. But since I still had the scans, I thought well heck, why not put them here? It's not like DC is going to reprint these anytime soon, and if they do I'll be absolutely delighted to take these scans down. Anyway, howsabout a little stage setting and- gasp- commentary?

As many of you are aware, in the early-mid 80's,DC still had the license to publish the adventures of the venerable Pulp and radio hero the Shadow. Having had less than blockbuster success with the quite faithful (and often quite excellent) 70's O'Neil/Kaluta/Robbins/E.R. Cruz take, it took them a while before they decided to leave the Shadow to the tender mercies of Howard Chaykin, fresh off his triumphs of American: Flagg! and his Blackhawk miniseries. Chaykin, as was (still is, I guess) his wont, decided to update and revamp the whole shooting match, taking the character out of the 30's and plopping him square in the 80's, establishing that Kent Allard, the true identity of the Shadow, retreated from time to time to a mystically advanced city named Shamballa to recharge his batteries, so to speak, and remain young. Also, he deconstructed the supporting cast, aging eternal sidekick Harry Vincent and perpetual love interest Margo Lane, and introduced a whole new group of agents, two of which were his twin sons, natives of Shamballa. A radical and fresh take, for sure. It was successful enough, and certainly controversial at the time, but I suppose Chaykin was keen to move on to other projects (and if I recall correctly started working in Hollywood on TV projects not long after) so when DC announced the ongoing series it was credited to newish writer/editor Andy Helfer, and art would be provided by Bill Sienkewicz, who was a big fan favorite at the time, coming off brilliant stints on Moon Knight, Elektra: Assassin and assorted X-books. What we got was very much a continuation of the setup Chaykin provided; Helfer, right before our eyes, refined a very dry and very sneaky sense of humor that crept throughout the arch events of the first six-issue arc, in which the Shadow encountered a sinister TV Evangelist known as The Light. Sienkewicz turned in some typically inspired graphics for his part, and the opening arc was most likely considered a success by all concerned. Then, Sienkiewicz decided to move on, and #7 was illustrated by the late Marshall Rogers, with inks provided by another relative newcomer, Kyle Baker, an artistic chameleon who could do cartoonish and straightforward, and whose style was so unusual that I don't think the Big Two really knew what to do with him, based on his limited assignments beforehand. Even though the new Shadow seemed to have a lot of buzz, there were still a lot of people carping about how it wasn't faithful to the Pulps and how could you have such jet-black humor and...you can imagine, I guess. The more things change, the more things stay the same. Then, the next issue, #8 (from which the above scans come) saw the debut of a new story arc, entitled "The Seven Deadly Finns", as well as the debut of Kyle Baker on full art duties- and then things really got interesting.

Baker's sly, often deadpan, very symmetrical (note the panel to panel progressions in the pages above, they just flow) work brought out even more of Helfer's whimsically black and barbed sense of humor, and an already out-of-control series took full flight and soared for another dozen issues, until ultimate rights-holders Conde Nast (and this is the conventional-wisdom version of the events; I'm not sure if it's ever really been explained to anyone who cares' satisfaction), seeing how, by issue #18, the boys had killed the Shadow, then decapitated him, and had his head placed on a robotic body (eventually he was to battle old enemy Shiwan Khan, who had had the same procedure)- well, with the eventual Alec Baldwin film on the horizon they decided that maybe their license holders shouldn't be publishing such a bizarre take, and the plug was abruptly pulled, mid-series, and replaced by the faithful-to-the-source, earnestly nostalgic, and deadly dull in the wake of Helfer/Baker The Shadow Strikes!.

But for our purposes, what transpires above is a scene in which the Shadow, seeking information about the drug-dealing arm of the crooked Finn family, marches down the street to interrogate a dealer in his den, and does so with brutal aplomb and a dry sense of humor (note the suggestion of a smile on his face when he presents his rocket launcher, just one of Baker's many brilliant touches). There's so much more to the next seven or so chapters that it would take all night to describe it. In case you're wondering, the noir satire interlude at the beginning is a look in on a character from #7, hard-boiled PI Richard Magnet, who is being approached by young writer Rupert Tome, who wishes to write the ultimate expose on the Man in Black and wants Magnet's input and help, since he encountered the Shadow in Washington. Also, the "No!" in the third-from-last panel is the opening shot, so to speak, in one of the more darkly funny reoccurring plot beats of the labyrinthine "Seven Deadly Finns" storyline.

OK- click to see them biggerer. I may post more someday, if you guys dig 'em and DC (or Conde Nast) doesn't drop the hammer.