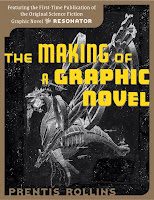 The Unsinkable Alan David Doane, inspired by Eddie Campbell's somewhat condescending remark "...anyone who thinks there are more than a few dozen so-called 'graphic novels' worth reading is an idiot.", has responded with a list of what he thinks are 100 graphic novels that are well worth your, mine, and our time. Since that's just begging to get all memed up, well, how can I resist? I shall bold the ones I've read, and add a * to those that I have read in floppy pamphlet format, but not via the actual collected publication. Which leads me to carp that more than a few of these are actually what I consider trade paperbacks, that is to say collections of previously printed works, rather than graphic novels, which I define as original stories written/drawn for and published in that format for the first time. Anyway, what ho!


100 - Little Nothings: The Curse of the Umbrella by Lewis Trondheim (NBM)

096 - Lost at Sea by Bryan Lee O'Malley (Drawn and Quarterly)

082 - God's Bosom and Other Stories by Jack Jackson (Fantagraphics Books)

078 - Conan: Born on the Battlefield by Kurt Busiek and Greg Ruth (Dark Horse)

075 - Black Hole by Charles Burns (Pantheon) (I've read a couple of the singles, but never finished this series. I should remedy that.)

066 - The Push Man - by Yoshiro Tatsumi (Drawn and Quarterly)

056 - The Silver Surfer by Stan Lee and Jack Kirby (Marvel Comics) (I'm assuming this is the 1978 graphic novel, which I wasn't impressed with)

055 - Jack Kirby's Fourth World Omnibus by Jack Kirby (four volumes) (DC Comics)* (I own the first two Omnibi, plan to get the others soon)

050 - The Outer Space Spirit by Will Eisner, Jules Feiffer and Wallace Wood (Kitchen Sink)* (I read these when Kitchen Sink reprinted them in the 70's magazine)

048 - The Placebo Man by Tomer Hanuka

041 - The Book of Leviathan By Peter Blegvad (The Overlook Press)

039 - B. Krigstein Comics by Bernard Krigstein (Fantagraphics Books) (I want this)

035 - The Filth by Grant Morrison and Chris Weston (DC/Vertigo)

034 - The Complete Calvin and Hobbes by Bill Watterson (Andrews McMeel)

032 - Marbles in My Underpants by Renee French (Oni Press)

029 - The Castaways by Rob Vollmar and Pablo Callejo (NBM)

016 - The Complete Peanuts by Charles Schulz (Fantagraphics Books) (I have the first two volumes, plus a lifetime of reading the funnies)

005 - American Elf: The Collected Sketchbook Diaries of James Kochalka (Top Shelf) (I've read a ton of the dailies, and I think I have at least one collection, but I don't think I have this particular one.)

002 - Diary of a Teenage Girl by Phoebe Gloeckner (Frog LTD)

001 - From Hell by Alan Moore and Eddie Campbell (Top Shelf)*