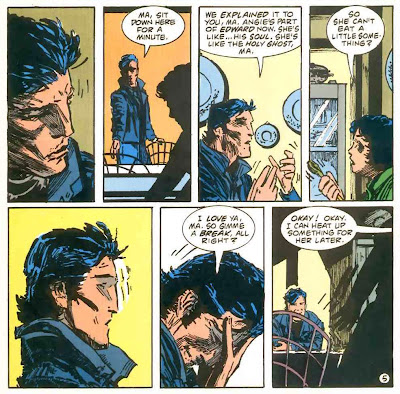 Way back in 2002, I created my first (and only to date) website, dedicated to spotlighting a comics series I love more than just about any other, DC's Thriller. Full of good intentions, I worked on it for months, intending for it to not only be a place where people could find out about the book, but also where I could keep people posted on the further work of the series' creators, Robert Loren Fleming and Trevor Von Eeden. To that effect, I put in a "News and Information" page, with a link to this blog (just in its infancy at the time!), promising to update when news came along. When I was able, via connections, to make the acquaintance of both gentlemen, and talk to them extensively on the phone as well as via mail, both snail-and-e varieties, I felt certain I would be able to do just that.

Well, as it so often does, Murphy's Law reared its ugly head.

About a year after the site went live, I had some problems with my good ol' 1999-vintage iMac, and felt like I needed to do a clean reinstall of the system files. Having been to a few rodeos, I knew I'd need to back up the important files I had on there, especially the working Freeway files that made up the pages of the website. Using a CD burner I had recently purchased, I burned the files on a disc. Or so I thought. After I had successfully reinstalled the system files, I got ready to put the Thriller site files back on, and discovered to my horror that the disc didn't burn them properly, and they were lost and gone forever, dreadful sorry. Of course, hindsight being 20/20, I know now that I should have checked the disc before I proceeded with the reinstall. Be that as it may, the upshot is that I now have no way of editing the files that you see on that site, because they're merely picture files, like jpegs, with no elements for me to select and manipulate.

And it's been that way now for almost six years. As with so many things in my life, I keep saying that I'm going to get around to redesigning the damn thing, and create new files that I can edit, and for the love of Pete back them up properly. I also want to get it off Angelfire.com, with its multitudes of popups, and on a domain of my very own. But I am nothing if not a procrastinator, and also have the disadvantage of having created it initially on Freeway, an application that I have for Mac OS9 but nothing newer. Also, I've kinda forgotten how to do a lot of the stuff I did to create the site in the first place- as I know from my jobs in printing and graphic design, sometimes software apps are like riding bicycles, things will come back to you if you get going with it, but unfortunately the good ol' indigo iMac isn't working so well anymore and the only other place I have access to OS9-enabled computers is at my job, and frankly, I don't want to spend the time there to do anything more than I have to. I have been trying to learn to use Adobe Dreamweaver on my laptop (which isn't really mine, and will have to be sent back soon), but it's not so easy to just fall right in and get started with that. Also, I've had Wordpress suggested to me, but it seems more geared towards creating and maintaining a blog, rather than the dedicated website I want the new Thriller site to be. Plus, I downloaded it at work and it made no sense, plus, it seemed like I needed to have my domain in place, which I don't. So. SOMEDAY I will get my ducks in order and redo the website. I want to get a new laptop, and I'd build it on that. But it doesn't look like it's going to be anytime soon, so we're stuck with what I have right now.

Sorry to ramble on like that, but I just wanted to explain to those of you who are coming here from there what's going on with the site, and why it hasn't been updated since 2003. I have tons of cool stuff to share that I didn't have then, including copies of Fleming's scripts for issues #'s 1-7, and some Von Eeden art which he did for me, as well as some correspondence that mentioned a lot of the controversial things he discusses in the Comics Journal interview which comes out this week, today as a matter of fact. If I can ever get the site redone, all of it will be there.

And as far as news and information goes, of course, there has been no sign of the Thriller series, at least in the pages of DC comics today. No hints of a revival, either, which, given the way things tend to be brought back at DC these days, may be a very good thing. Bob Fleming was out of comics for several years in this decade, but recently made a return, along with co-scripter Keith Giffen, to the title for which he's probably best-known, Ambush Bug, via the recent miniseries that has yet to see its final issue released. Hopefully we'll see more from him in the future. Trevor Von Eeden has had a somewhat higher profile, especially in the last few years via his Jack Johnson bio comic that ran on Comicmix.com for a while, as well as the Journal interview which may be the reason you're here, due to its citing of the Thriller site (for which I owe Michael Fiffe big-time; I've always wanted to be published in the Journal, and it looks like that's as close as I'll ever get!). Trevor also has really increased his online profile as well via a Facebook page and a brand spankin' new website, for which I'm supposed to write a Thriller summary, and of course I'm way overdue in getting it done.

OK, that's all I got- thanks for reading, and if any news pops up about Thriller or its creators, be sure I will relay it here.

BTW, the page excerpt above is from Thriller #7, Bob and Trevor's last issue together. Von Eeden wasn't happy with his art in this later period, but I think it looks just fine.
Posted by Johnny Bacardi at 6/24/2009 09:12:00 AM

Thanks for sharing this link, but unfortunately it seems to be offline... Does anybody have a mirror or another source? Please reply to my post if you do!

I would appreciate if a staff member here at johnnybacardi.blogspot.com could post it.

Sorry about the delay in getting your comment posted; it wound up in my spam filter, and generally I delete anything by "anonymous" that winds up there. Fortunately, I read the rest of the comment before deleting!

I don't know which link you're referring to; I assume you mean the Trevor Von Eeden interview; looks like all that's left of it is here. Well worth tracking down the back issue, though!