It is taking me forever and a day to get those frigging comics reviews done. In the meantime how about some art appreciation? 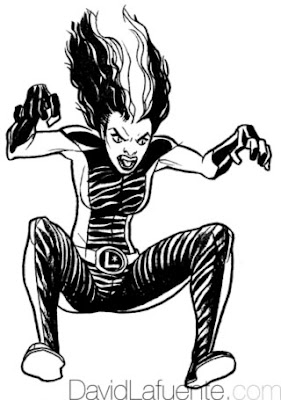 I don't buy Legion of Super-Heroes these days, although I've had my spells of doing so in the past. I gave Waid and Kitson's most recent reboot a shot, but found it needlessly fussy and Kitson's freeze-dried art gave me the terminal yawns so I dropped it. I am not a fan of the Man who Creatively Bankrupted Marvel For a Decade, so I was not tempted to sample his take in recent issues. But y'know what? If this fellow, DAVID LaFUENTE (say it like Mike Myers said "Daisy Hfuen-tez". No, wait, don't.) were to be assigned the 30th Century Super-team, then I would most definitely give it a try. On his blog, which you visited if you clicked the link, he features a lot of sketches of various characters, mostly New Mutants and Legion characters. In fact, he states early on his intent to draw all the LSH, and I sincerely hope he gets around to Kinetix before he loses interest...

On the right there is Catspaw, a Bierbaum/Sprouse era creation from the early 90's. I liked her, and I liked that brief era.

A hat tip to Stuart Immonen, no slouch himself at the art stuff, for the heads-up. Seems like Mr. LaFuente is going to be illustrating a new Hellcat series scripted by his significant other, Kathryn.
Posted by Johnny Bacardi at 4/04/2008 08:00:00 PM