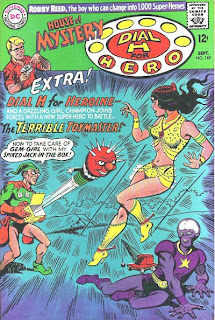 RIP JIM MOONEY, who died yesterday according to the obituary pointman, Mark Evanier.

I have to be honest- growing up I was not really a fan of Mooney's work. I didn't especially dislike it, nor did I go out of my way to avoid it, but neither did I seek it out like I did the Adamses and Sterankos from when I started paying close attention to artists' styles. His anatomy was just a little too stiff and his inkline just a little too grubby for my taste. Mooney also just happened to draw a lot of books that I did not buy, mostly Supergirl stories that I would encounter in the odd 80-page Superman comic that I'd pick up. And of course, not really being a big Superman fan, that wasn't often. Also, he did a lot of work on Spider-Man in the 70's, long after I had lost interest in the character. Two exceptions to that, however, were the Robby Reed Dial H for Hero stories that appeared in House of Mystery for a while there- I got more than a few of those, because there was nothing I liked more as a grade-schooler than weird superheroes- and then several years later, when I bought Marvel Spotlight featuring the Son of Satan as a 13-14 year old. On that book, I was more enamored of the oddball scripts that Steve Gerber was writing, and tolerated his art on the first few issues.

But, for this if nothing else, I feel sad at his passing, another longtime veteran of the pen and ink wars that took place in my heart and in my head during my formative years. Here's to ya, Mr. Mooney.
Posted by Johnny Bacardi at 3/31/2008 03:44:00 PM

Email ThisBlogThis!Share to TwitterShare to FacebookShare to Pinterest
Labels: obits