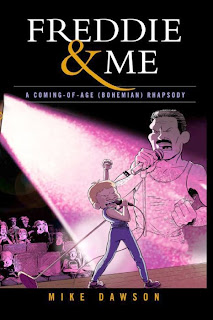 One thing that I'm absolutely worn out with, when it comes to comics, is the autobiography "genre", or whatever you want to call it, especially its sister genre "the crudely drawn autobio indie comic". Unless you've had one hell of an interesting life, with many unbelievable encounters and fascinating occupations, I just don't want to know what a chronic masturbator you are or how much of a dick you've been to your boy-or-girl friend or how much of a sexual identity crisis you or you best friend has or how tough it was growing up as a runaway/hooker/oppressed minority, and I especially don't want to know if you illustrate it in a style that looks like you've never bothered to learn the rudiments of drawing, and the delirium tremens are living in your wrists.

However, there are always exceptions to my "I don't care about your messed-up life" mindset, and I'm pleased to report that this new graphic novel from Mike Dawson, FREDDIE & ME, certainly comes under the exceptions to the rule category. It doesn't hurt if you tie it in with a rock group that (at least at first, anyway) had ties with the Glam Rock movement of the early 70's, in this case Queen, specifically its lead singer, frontman, and co-writer Freddie Mercury.

I haven't written too much about Queen here, even when I was writing a lot about music on this blog; my enthusiasm for the group had waned a bit by the early Aughts. However, I do go back quite a ways with the band and its music; the first time I remember hearing them was in early-mid 1974, at the house of a couple of friends of mine, brothers who both ended up fronting rock and roll bands as adults. Their house was the hangout in those days, and a big part of hanging out there was listening to music, which we did indoors on their stereos or outside via cassette and 8-track players. One of them had Queen II, their sophomore effort, and I was absolutely captivated by its flamboyant Led Zep-meets-the Brothers Grimm lyrical slant and adventurous musicianship. Their doctor father, a gruff and garrolous fellow with a deep rumbling voice, remarked upon seeing the cover: "Queen two? Looks like QUEER two to me!", which amused us all no end. It wasn't long until I had my own copy, and I was delighted to see that they released their third, Sheer Heart Attack, only a few months later. By then, I'd done a little research (mostly in CREEM), and was pleased to see that they were aligned with the Glam bands I loved like Mott the Hoople in the waning days of Glitter Rock. After that, "Bohemian Rhapsody" made them superstars, and it seemed like everyone in the circles that I kinda-sorta fit in, i.e. the "popular" cliques, loved 'em- and that always struck me as odd because let's face it, Freddie was as flamboyantly gay, even before he adopted his leather togs and butch haircut in the late 70's, as could be- and while it didn't bother this Bowie/Bolan/Lou Reed fan in the slightest, let's face it: small town Kentucky in the 1970's (and today, too, I suppose) wasn't exactly a bastion of tolerance for alternative lifestyles. It always surprised and amused me how willing everyone was to accept the band and its frontman. Perhaps they regarded him like Liberace. Who knows. Anyway, I eventually lost interest in Queen as each album shifted in sound and focus from the hard rock, fantasy, and Beatlesque pop flourishes to the Mack-produced Eurodisco sound of albums like Hot Space and Some Kind of Magic. Still, once in a while I'd hear a "One Vision", "Flash Gordon", or "Radio Ga Ga" that I liked, and I held out hope that they'd someday get around to making some music that was a little more, well, organic. By 1990, I was working part time at a smalltown radio station with an alternative music leaning, and I decided to helm a Metal show to take advantage of some of the harder sounds that were becoming more popular- the Nirvanas and Chili Peppers and so on. One of the contacts I made as music director of that show was at the newish Hollywood Records, who had just arranged to release all the Queen albums to date on CD. I was delighted to get over half of their catalogue and spent quite some time reacquainting myself with their music, and hearing albums I'd passed on (like 1989's better-than-I-expected The Miracle) initially. Tempering this was the announcement later that Mercury had contracted AIDS, and his subsequent death- a sad end for a great showman. It made me a lot sadder than I expected it to, for sure. Since then, I still get a kick out of digging out those first 6 or 7 albums and listen to them fairly often.

I don't go back with Mike Dawson nearly as far; in fact, other than a couple of emails I don't know him at all. After this memoir, though, I do know a fair amount about him, especially his affection for Queen, which began with a chance viewing of the video for their single "I Want to Break Free", and as is detailed so well in Freddie & Me, it became a lifelong love affair. It's something how all of us develop a bond with a musician or group of same, and I can't think of another example that details this phenomenon better than this. While of course he became a fan of other musicians, his Queen love remained consistent all his life to date. I first became aware of Freddie & Me through Mike's LiveJournal; he had been posting pages from it as far back as 2006, if memory serves. The first scene I saw was a low-key fictionalized conversation between Freddie and guitarist Brian May, late in the former's life- and it was reflective, smart, and downright touching. I wanted to see more, and enjoyed each subsequent chapter that he posted. I soon came to realize that this was going to be more of a personal reminisce, autobiographical in nature, and while I hoped to see more imagined band scenes I soon came to realize that Mike was a pretty interesting dude in his own right, and I was looking forward to reading this when it finally came out. And now, it's going to be available everywhere in May.

Mike lets us into his life with an open, unguarded approach- no masturbation stories, thankfully, but he doesn't hesitate to let himself look foolish when needs must. You never know what people who do these stories leave out, but he seems to be ready to let us know the score when necessary. We see his childhood in England, and subsequent move to the US and the adjustment period that was ongoing throughout, complete with learning to navigate high school and college, and of course those first experiences with girls. We go on to his young adulthood, career, and a particularly moving interlude involving trips back to England and the death of a beloved grandparent. While he doesn't always go on about music, it was certainly a big part of his life, along with drawing, and Fred & Co. are frequently referenced, at least in the background. There are a few of the band scenes included here, but unfortunately the scene which grabbed me at the beginning was cut. He says he might repost it at some later date, I certainly hope so because I'll link you right to it. Dawson employs a loosey-goosey sort of cartoonish style to illustrate the proceedings- his work reminds me a bit of his friend Alex (Box Office Poison) Robinson or a less exaggerated Peter Bagge. His storytelling chops are strong; he moves the story along at a great pace, lays out everything very well, and he is especially strong at blackspotting to enhance mood. His is not a style which is impressive on the surface, but when you look closely, it's deceptively outstanding.

I suppose it's said that the best autobiographical works are those in which the reader can find a bit of themselves therein; that's certainly the case with me as I read Freddie & Me. I'm several years older than Mike, but I can strongly relate to his attraction to the music and image of Queen, similar to what I felt when it came to the Beatles, Nilsson or Bolan to name a few. I enjoyed Freddie & Me as much as anything I've read certainly this year, and probably quite some time before that. It's a very affecting and involving memoir, with strong illustration to match, and I recommend it highly to anyone who has ever sung into a hairbrush in front of a mirror, fist pumped up in the air, as they listened to their favorite band cranked up to ten. A
Posted by Johnny Bacardi at 3/19/2008 06:43:00 PM