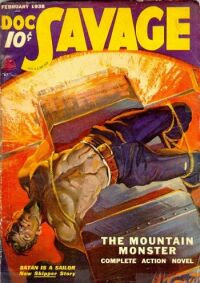 Via Mark Evanier (who probably should have started reading them at age 13, like I did), I find out that Bacardi Show Birthday Greetings are in order today for Clark ("Doc") Savage Jr., 1930's-1940's star of a series of Pulp adventure novels that reached a whole new audience in the 1960's and 70's when Bantam books reprinted them out of order in a series of paperbacks with 62 stunning, realistically painted covers by James Bama.

Hard to adequately describe how much I dug these books as a teen, and how hard I worked to acquire the set of paperbacks. Of course, truth be told, I first discovered Doc and his Fabulous Five via the short-lived Marvel Comics adaptations (right, Jim Steranko cover) that sported art by Ross Andru which still defines the way I see these characters in my mind.

The original pulp stories were up and down- most of them were written by a fellow named Lester Dent, who is generally acknowledged as Doc's creator, under the Conde Nast house name of Kenneth Robeson- and by and large his were the best. Other gentlemen contributed to the canon as well, and they were mostly unremarkable, often awful. I think that the idea of Doc, his crew and cousin Patricia (who I always wanted to read more about, wouldn't ya just know it), and the larger-than-life menaces they often fought was enough to inspire awe and the promise of mind-bending adventure. And sometimes the reality didn't (as so often is the case) match up to the expectation...but hey, sometimes it did, and that was magic. And I'm rambling.

So, anyway, happy birthday, Doc- I just might pull out one of the paperbacks and give it a read today. And I'll put on the first Electric Light Orchestra album, just like I sometimes did back in the day- "Manhattan Rumble (49th Street Massacre)" always evokes Doc riding on the running board of his Roadster, with Monk and Ham bickering all the way, en route to combat with some weird menace. Ah, nostalgia. If I was collaborating with Kerry Conran (Sky Captain) on my Doc movie, I'd recruit Roy Wood to do the soundtrack, which I'm sure would be regarded with horror by the suits and bean counters in Hollywood.

ETA: And hey! Due to some judicious Googling, you can click below and hear "Manhattan Rumble" in all its glory! So pick up a Doc paperback, and start reading!