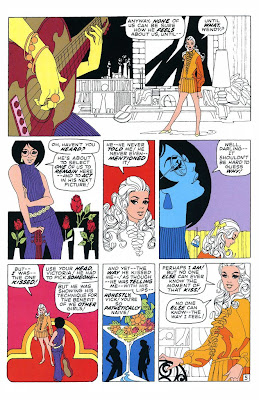 This Jim Steranko romance comic story got linked to in a couple of places yesterday, for good reason- it's a beautiful job by a master at the top of his game, even though it's in service of a tossed-off love story comic script by Stan Lee, who probably forgot about it five minutes after he handed it off. I had never seen this before, and it's an amazing thing to me. Steranko perfectly sums up that late 60's early 70's groovy psychedelic vibe with an uncharacteristically (for him, anyway) open and light style, full of frilly filigree (as befits the aimed-at-teenage-girls genre) and Saturday morning cartoon flourishes; compared to a page from, say, "At the Stroke of Midnight" from Tower of Shadows, they're literally like night and day. I gotta also give it up to the letterer, which appears to be Artie Simek- his solid characters look really good, grounding, perhaps- amidst all the Pepperland-esque graphics.

But be that as it may, I couldn't help but notice how much the linework in the page above, especially the guitar-playing young lady in the upper left-hand corner, reminds me of none other than 100 Bullets' Eduardo Risso. It never occurred to me that Steranko might have been an influence on him, but it's forehead-smackingly obvious to me now. Don't you agree?
Posted by Johnny Bacardi at 2/15/2008 10:09:00 AM