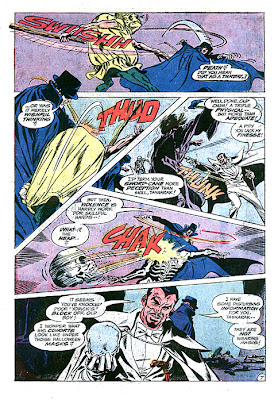 I sat out a week, but I'm back and in effect, with
FRIDAY NIGHT FIGHTS!

Tonight's brawl is courtesy of Len Wein and the late, great Jim Aparo, from Phantom Stranger #24- Len's final issue of his outstanding run on that title. Here we see PS and ongoing foe/ally Tannarak putting a beatdown on some Dark Circle cultists. The Stranger didn't throw down often, but when he did, he made it count.

BAHLACTUS SAID KNOCK YOU OUT!