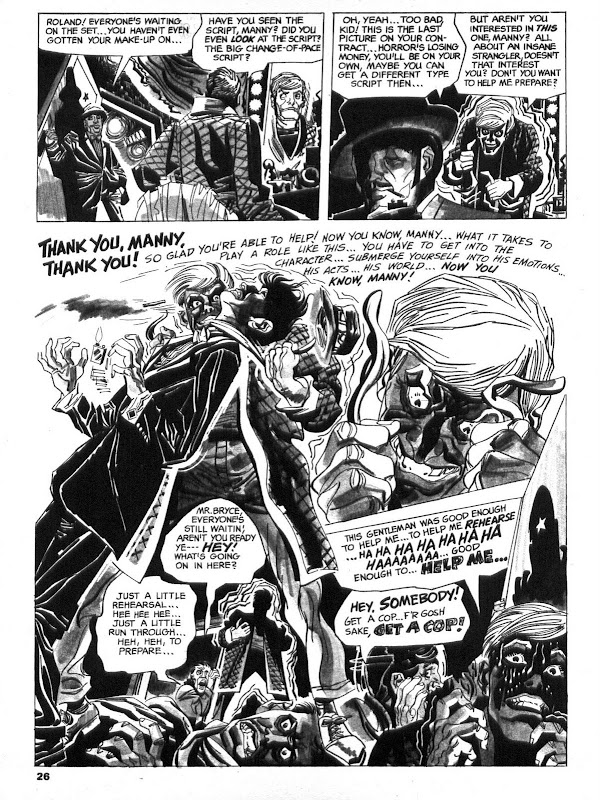 A while back, you may recall me writing about horror comics and in one particular case the Warren Magazines work of Jerry Grandenetti. But even though he has a website (link in the blogroll section) it features mostly newer stuff and doesn't have many examples of the stuff from the mid to late 60s that blew my preteen socks off.

Yesterday I was over at my Mom's house. My mom recently had her hot water heater spring a leak on her, and as a result had to clean up a lot of water from her basement floor. She had to move a lot of the cardboard boxes (my Mom's a bigger pack rat than me, if that's possible), and she found one which contained a lot of old, musty, beat-up comics which I had left behind when I left home about a hundred years ago. I remembered them, because I had chosen not to put them in my original collection when I actually started "collecting" in my late teens, due to their extremely poor condition, and that box was where I had put them. Still, it was a lot of fun going through the box and seeing a lot of those old books. One of these books was a coverless and marked on (by 8-year-old me) copy of Eerie #8, which featured scripts by Archie Goodwin and a great inkwashed story by Gene Colan, the classic "Demon Sword" story by Steve Ditko (inkwashed beautifully as well), a mind-blowingly detailed post-apocalypse story drawn by the often overlooked Dan Adkins, a excellently drawn weird western by John Severin, and "Type Cast", the story from which the above page is taken, with a gloriously hallucenogenic, expressionistic art job by Grandenetti, just like I've been talking about. I thought that this would be a great opportunity to scan a page and put it out there for all to see.

It's a tale of an actor named Bryce who gets cast in, against his wishes, horror films back in the Thirties. He just can't get motivated, he complains to his manager, to play such ridiculous and sordid roles. When his manager suggests that he try to draw inspiration from immersing himself in the surroundings of the characters he's expected to play, then he reluctantly agrees and goes walking in a graveyard later that night. He really begins to enter into the midset of the hunchback character he's asked to play. When he's accosted by the caretaker, he panics and attacks the man, which gives him the necessary experience to play his part with the proper conviction. Now a success, his manager keeps getting him more horror roles, much to Bryce's chagrin, and the desperate actor keeps doing his increasingly violent research, until things come to a head when he strangles his manager, before filming a movie about an insane strangler. Quite insane by now, he is arrested and committed. The story opens with his release thirty years later, and ends with the discovery that the asylum staff released the wrong man- a patient named Brice, not Bryce, should have been released. When the director checks on him, and discovers that he has taken a role in a movie now filming...and when the director asks the name of the picture, both men in the office gaze at the newspaper on the table with the headline "Knife-wielding manic strikes again!" as the director intones "The Story of Jack the Ripper...!"

Anyway, it is a nice little story with a couple of clever EC-ish twists, which is what Goodwin and Warren were all about. But one of the things that makes this tale so effective is the chaotic rendering of Grandenetti, with its unconventional layouts, adventurous use of lettering, and effectively moody wash technique. I've always appreciated how, the farther the story goes along and the more deranged the protagonist becomes, Grandenetti's figure rendering becomes more jagged and harsh, and in moments of great stress he chooses to depict this by means of radiating lines eminating from Bryce's body.