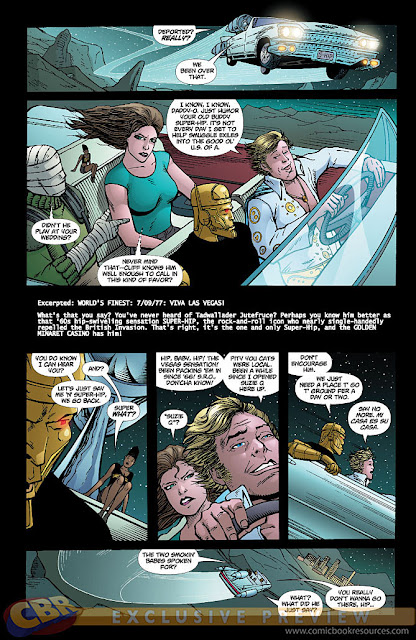 Oh, and DC? I beg of you- next time you need cannon fodder for your big multi-issue line-wide crossover doom-and-gloom event, please forget Giffen has done this, OK? Thanks.
Posted by Johnny Bacardi at 3/08/2011 08:47:00 PM

I'm reading it. I try to show love for the DP; they are my favorite concept in comics and between the original run by Drake and Premiani and Morrison's work on them, I have a permanent soft spot. It's too bad DC can never seem to get the concept right these days.

When I saw the preview, I knew the only one more excited about this than me would be good ol' Johnny B.

I dropped the series some time ago, however, because, er, well, I don't like it. At all. But with the increasing speed at which they've been relaunching Doom Patrol again and again, the next spin of the wheel may be more to my tastes.

Does Harvard-Harvard III show up, too?

Alas, he doesn't. But maybe next issue...

"bet a nickel that [Cronkite] had an assistant do it as a favor to ol' Chuck Schulz."

I'd take that bet. Walter was a word man by nature, and in those later years he wasn't exactly overworked - something he was not happy about. While there are people who have gone that direction -- Bill Cosby had a cowriter for his Peanuts intro -- I suspect Uncle Walter was not among them.

Well, OK- guess I'd be out a nickel! Still, I think you get my drift.