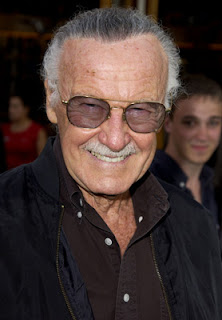 It's Stan the Man Lee's 88th birthday today.
I've held forth before about Stan and what I felt like his role with Marvel was; while I certainly can believe that many, if not most, of the concepts that galvanized everyone so much back in the early 60s were thought up by Kirby, Ditko, and who knows who else, I do believe that Stan's dialogue and plotting skills were very important in shaping those early classics. It seems that Stan was the hustler, the instigator, the shit-stirrer- keeping everybody up, keeping everybody positive, focused, and committed, and coordinating Marvel's ascent back in those long-ago days. It seems like the only thing he couldn't do was keep everyone well-paid and happy, and thus those halcyon days were relatively short-lived. Indeed, once the most-likely more-lucrative Hollywood and the college lecture circuit beckoned, Stan's focus and enthusiasm for editing and scripting seemed to wane...witness how flat and dead the dialogue is on his later issues of Fantastic Four and Thor, especially compared to his immediate successor, Roy Thomas', overheated, hyperbolic prose.
Regardless, at no point in his early Marvel career was Stan's scripting better than on the title in which he took the most pride, I think- Amazing Spider-Man. Yeah, a case could be made for Silver Surfer, but that was much later. One of the first Marvel comics I ever read was ASM #16, in which Spidey teamed up with Daredevil to battle the Ringmaster of Crime (He's been popping up on this blog a lot this year, hasn't he?) and his Circus. The breezy banter between DD, Spidey, and the Crime Circus thugs trying to jack them up delighted me as a 4 year old, and has continued to do so every time I've reread it in the 46 years since. I thought, as tribute, I'd post those pages here so you could read them for yourself. Click to read biggerer, you know the drill: 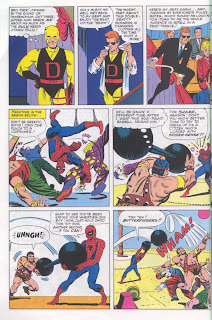 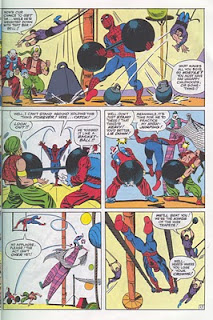 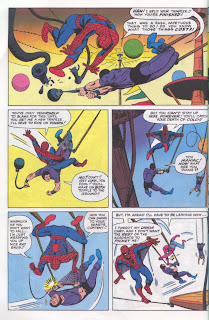 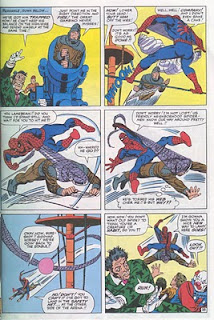 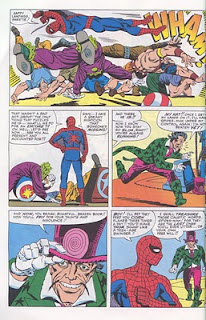 Now, sometimes Stan could wield the heavy hand when it came to the soap operatics, and often his attempts to provide his godlike and cosmic characters with a profound voice were often stilted and ludicrous. But on Spider-Man, he was on top of his game, keeping the expository dialogue in check and hand-wringing in its proper place, plus, as above, he didn't leave out the humor. I know damn well Ditko did not write that dialogue, nor did Kirby, as anyone who's read his post-Marvel work surely can see, write any in their collaborations either. So here's to you, Mr. Stanley Lieber- when you wanted to, you helped change a lot of lives, including mine, for what I've always thought was for the better, riding herd on those early game-changing days. For that, as well as your current comics ambassador-like station, I think you'll always deserve a lot of credit. Happy birthday, and many more.
Posted by Johnny Bacardi at 12/28/2010 02:28:00 PM

To say it as Stan would: I resoundingly concur with your frabjous sentiments, pilgrim!

I'd add that I think Stan had a greater understanding of individual "voice" than other comics-writers before him, and that this is what makes the Marvel Universe credible, at least at a young age.

Kirby's writing is problematic because his 70s work shows that he could do the same type of plots he did in his Marvel days, but he was not able to finesse them to give his fantasies grounding, with the result that young readers were probably confused by the Fourth World, excellent though many issues were.

The line from Daredevil about changing clothes being the biggest pain about superheroics is one of my most favorite lines of comic book dialogue ever. Brilliant, and almost assuredly true, I'd imagine.