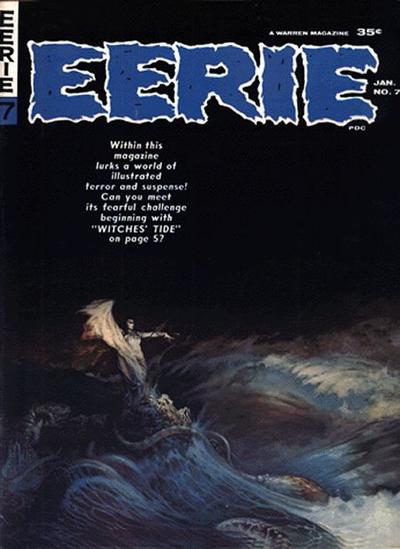 Word has gone out that the great Frank Frazetta is dead of a stroke at 82.

I first became aware of him primarily as the guy who did those dynamic and evocative Warren magazine covers when they hit the magazine racks in the mid-1960's; although, ironically enough, the first one I ever bought (well, OK, had bought for me) didn't sport one of his paintings on the front, I know without a doubt the second one did, and I loved looking at the others in house ads, and as they came out on new releases. Eventually, as a teen, I discovered the many paperback covers he did, most notably the Conan series, and began to find out how he fit in with his contemporaries and the influence he had on some of my favorites of the time, most notably Berni Wrightson. He was one of the greats, and almost more of a larger-than-life figure than many of the characters he brought to life.

If you haven't seen the documentary Frazetta: Painting with Fire, that's a good place to start, and I'm sure many of the usual suspects will be posting links to many places where you can get an idea of the legacy he's leaving.
Posted by Johnny Bacardi at 5/10/2010 01:35:00 PM