Passing along an appeal. 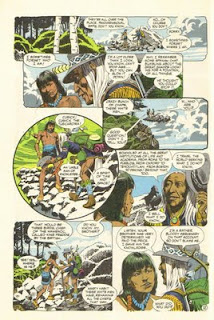 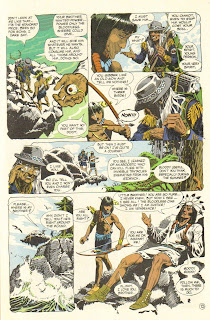 Got some disturbing news Friday night when I was reading Steve Bissette's Myrant blog- seems that Timespirits scripter and co-creator Steve Perry is terminally ill and apparently destitute besides; according to Bissette he is in dire straits, and he has put out a call for help for his friend.

Even though I don't know Perry personally, I had some brief email correspondence with him a few years ago after I wrote this post about the 80's Epic series that lasted a too-brief eight issues. A year or two later, he emailed me out of the blue to let me know that Image was planning to reprint TS in a trade collection, which has yet to see print due to what I understand are technical issues of some sort. He was very nice to me in both instances, and I appreciated being kept in the loop. Timespirits is one of my absolute favorite series; a true unappreciated and overlooked gem in my opinion, and even after all this time, when I reread these books I am often amused, excited, and even moved by the drama, humor and adventure contained in those stories. Of course, a large part of this is due to Tom Yeates' excellent art (as well as a couple of others who did short features, including Bissette himself and Rick Veitch), and I don't know what the exact ratio of ideas and concepts was between the two...but Perry had a really dry, but marvelously expressive, dialogue style that served these stories very well and he made the two leads, Cusick the Tuscarora and Doot of the Wawenoc, come alive in a way that few writers could, as true then as it is today. Anyway, this news makes me very sad, because I have been touched and moved by these tales, and it hurts to hear that one of the men responsible is in such straits.

Even if you've never read Timespirits, I hope you can find it in your heart to perhaps send something along or take some sort of appropriate action. For my part, I will try to send something, but as always I live paycheck to paycheck and rarely have much to give. I have considered perhaps doing an illustration of the 'Spirits, and auctioning it on eBay, to send whatever I get along to Perry. I'll let you know here when I do.
Posted by Johnny Bacardi at 8/23/2009 11:17:00 AM