"Go on back to your overstuffed desk chair...and read your comic books!" 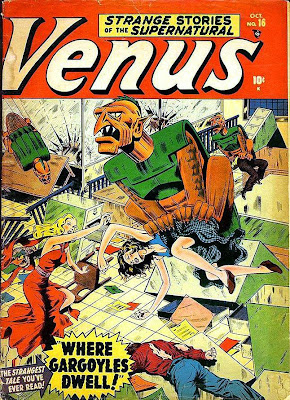 At various points over the last seven years, I'm sure you all remember how I've rambled on and on about Bill Everett's Venus, and how much I love the few stories I've read in reprint format over the years- most notably in a few issues of the mid-70's Weird Wonder Tales comic, as well as my first exposure to her original exploits, in Marvel Spotlight #2, at about the same time this picture was taken (as a matter of fact), in October of 1971..."Where Gargoyles Dwell" from Venus #16, all Everett, features some of the best art I've ever seen from him, and a wonderfully preposterous but still highly imaginative story which not only fulfills the monster requirement with the gargoyles (flying ones no less), but works in some good old fashioned Triskaidekaphobia and the urban legends about mysterious thirteenth floors of buildings, and lack of same. Plus, it has some great dialogue, right out of a 1940's Warner Bros. fast-talking career-gal flick- I can easily imagine a Barbara Stanwyck, Ginger Rogers, or my personal fave Priscilla Lane delivering these lines: 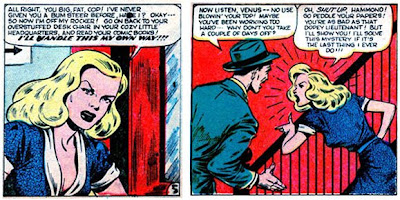 Quite the contrast from Jeff Parker's more passive, reserved goddess/siren/whatever she is, currently appearing in Agents of Atlas...here, Everett casts the Goddess of Love as more of a brassy gal reporter or grownup Nancy Drew type, showing real spunk and flash. Nothing against Jeff's version, and maybe it's just the Turner Classic Movies fan in me, but I think I like this oh-so-1948 version a lot better. Anyway, someone recently posted scans of this longtime favorite story of mine, at scans_daily I think but I forget, and I couldn't help but want to repost it here for posterity. The original scans were very dark and dirty; the source comic looked like it was very yellowed with age and had been through quite a lot. Nothing wrong with that, I guess, especially since these comics are so scarce in the first place; but I couldn't help wanting to clean them up a bit in Photoshop, so I tried. It's not perfect, I couldn't get rid of a lot of the darkness in word balloons and stuff, but I hope I made it look a bit more readable anyway. Hopefully (especially if Agents of Atlas takes off) someday Marvel will see fit to reprint all of these in a nice, cleaned up edition, but I won't hold my breath. OK- here's the story. Click on the thumbs to embiggen.