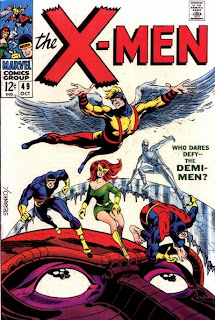 It's 10:47 PM CST, and I'm only now sitting down at the computer to check out the 'Net, and I'm greeted with this sad news. Please forgive me, because I'm going to ramble a bit. Now, you all know that as Tegan is with Aquaman, and Mike Sterling is with Swamp Thing, and so on, so am I with Drake creation Super-Hip. Whom Evanier didn't mention. For shame. Anyway, you may be wondering how come I've posted this X-Men cover, of all things, and not yet another Adventures of Bob Hope piece, or even an old Doom Patrol? Well, I'll tell ya.

Above is X-Men #49, cover-dated October 1968, purchased for or by me when I was eight years old. Back then, since all I had was the occasional couple of bucks from my parents a week allowance, it was not uncommon for me to go several months at a time without buying issues of a certain title, even though I may like the title in question. Only so much money, you know. And I liked but didn't love, X-Men, so it had been a few months since I had picked up a copy. I knew what had been going on because I had friends who had some of the prior issues (W.T. Stinson in particular- hey, W.T.!)...and I knew the X-Men had lost Professor X and had split up. The issues immediately preceding this one had the original team engaging in solo or duo efforts, and I guess sales didn't exactly skyrocket because in this very issue, they began to put the band back together again, so to speak, and also began to feature some snazzy Steranko covers (unless I'm mistaken, he did the interiors for #50). OK, here's the point- Mr. Drake was the scripter who had essayed the fragmented X-Men tales, as well as this particular issue, and I distinctly remember being a bit surprised that DC guy Drake was now writing for Marvel. Plus, his writing style, or "voice" if you will, seemed kinda stiff and clumsy, especially considering the established Stan Lee/Roy Thomas style that was so prevalent in those days. I had no idea about the office politics that had led to Drake moving on from National, in those pre-Internet days. Not long after this issue (his last was #54, according to the GCD), Drake moved on to other projects and Thomas came back, joining with Neal Adams to usher in a brief but stellar period on the Mutants that I still maintain was the high point of any X-book I've ever read, and that goes for the Claremont/Byrne stuff, too. Anyway, though his stint on the original X-title has been mostly forgotten, I think, looking back now on it, there was a lot of charm and vitality to those stories, and it's not really Drake's fault that they were overshadowed by what came next.

So that's why I have chosen the above cover to commemorate Mr. Drake's passing; it's an idiosyncratic memory but it's mine all the same.

Besides, I never was much of a fan of those old Doom Patrol stories when I was a kid (don't know why, I read them now and kinda like), and I couldn't find an appropriate page of the faculty and students of Benedict Arnold High School to post either, so there it is.