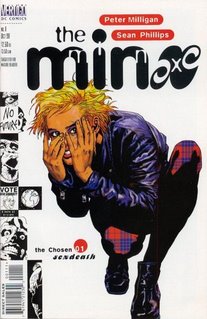 So...does this mean that we'll see a comeback for this long-gone title?

Anyway, lotsa luck, DC- although I'm far from the target audience, I'll probably be getting THIS, because it's new Andi Watson and I dig me the Andi Watson. Unless he's writing and drawing stories about new mommies and daddies and unemployed people.

UPDATE: Now see, this is why I generally don't try to do commentary on comics events. I see over at The Blog Which Hath Forsaken Me that the connection between the imprint's name and that comics series (which I thought I was so clever making) has already been made, and this pointed to a controversy between someone else using the name and DC, details of which can be found hyar and hyar. Guess I'll go back to whining about never posting and commenting on series that have been cancelled for a couple of decades.
Posted by Johnny Bacardi at 11/25/2006 05:52:00 PM