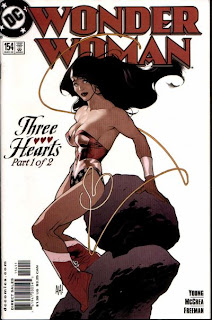 I've been reading, here and there, a lot of the reactions (some predictable, some not so) to the whole Playboy cover thing. And for the record, sure, it's in questionable taste- but not for Playboy, who has painted superhero logos (altered, as is the Wondy cover if you look closely) on women before. I think that it's intended in a cutesy, jokey kind of way and not in a mean-spirited fashion. But many don't see it like that.

Here's the thing, to me, and I feel like I'm whacking the hornet's nest with a stick when I say this-

Wonder Woman will always be objectified and not taken seriously as a fictional character until she stops wearing what is in effect a glorified one piece bathing suit.

It is a costume design that practically begs to be depicted in cheesecake/good girl art type poses, as Adam Hughes will attest. The only way she could show more skin is if she is naked, or wearing a two-piece or thong, which she may as well be. Besides that, for me anyway, there's always been a disconnect for me when I see her in the pages of JLA or the infrequent instances when I pick up her own comic and I ponder just how unrealistic and awkward it looks for this Princess of Themyscira (sp?), this noble, valiant warrior woman, clad in that one-piece, standing in a room full of fully clothed men and women, sometimes in all sorts of weather (yeah, I know, godlike powers, temperatures probably don't effect her). Obviously, I'm in the minority here, but even when drawn by the best in the biz such as Bolland, Thompson, Mahnke or Hughes, that costume has always appeared impractical and sometimes even downright silly.

And let me get this in: I know that they've tried to give her different outfits- the 90's black two piece jacket spandex biker shorts thing (which I thought looked OK except for the crop top), the 60's Diana Prince- Wonder Woman days- but nobody liked them, or if they did like these looks, the corporate trademark-perpetuating interests stepped in and said "Cease and desist- Wonder Woman is known for her star spangled swimsuit, and we can't have people getting confused." I hope nobody thinks that the 70's Wonder Woman TV show was memorable for Lynda Carter's acting ability...nope, it was the statuesque Carter tricked out in a red, white and blue leather corset.

Sure- Wondy should be a feminist icon and inspiration, not to mention the same for young girls growing up who can look to the character as a strong, proud, self-sufficient female role model, and as far as I can tell, in most cases, the various creators have taken pains to see that she's depicted in that fashion.

But the damned one-piece clashes with this depiction on at least a visual level, and I'm sure in others as well.

Of course, I can only speak for myself, and this is how I see the situation. Many, many other people, who love the character a lot more than I, obviously don't have this problem. It's just my unsolicited two cents' worth, make of it what thou will.
Posted by Johnny Bacardi at 1/14/2008 11:07:00 PM