"DETECTIVE COMICS 365 should be bought by no one over the age of seven..." 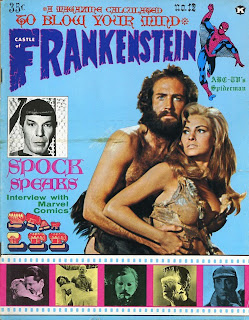 Come with me once more down Memory Lane, as I bring to you the Antediluvian Era of Comics.

Something else I ran across as I was exploring the World Wide Web was a site that offered downloads of scans of old issues of Castle of Frankenstein magazine, a New York-based publication which is remembered fondly by those of us old enough, and able to, remember it. Click on the previous link for more info, although I'm gonna hold forth about it anyway. An alternative to the Warren stable of magazines, specifically the venerated Famous Monsters of Filmland, it was written by fans for fans, and actually introduced a more mature approach, as well as serious criticism, into the mix- unlike FM, which afforded equal status and coverage to the likes of Plan 9 from Outer Space side by side with the genuine article, like Bride of Frankenstein, and was written in a more juvenile tone. Also unlike FM, CoF attempted to pay attention to the then-emerging 1960's comics scene, never more so than in the issue at left there, #12. By 1966, at age 6, I was a stone cold afecionado of FM, but was nuts about comics and monster/horror/sci-fi movies and TV, all the proper geek stuff, and I was always on the lookout for reading material related to same. One day, after a visit to the doctor (flu or something, I forget), while we were waiting for my prescription to be filled, I noticed the cover of #10 on the magazine stand because of the cover that featured the then-new TV version of the Green Hornet. Intrigued, I begged my Mom to add a whopping 35¢ to our bill and brought it home, devouring it in one sitting. I was especially fascinated by the "Frankenstein TV Movieguide", capsule reviews of genre films, unlike any I had seen before (and yes, I liked reading movie and TV reviews, even at age 7. I was a precocious child.). This style of reviewing things has stuck with me to this day, as anyone who's tried to make it through one of my Confessions of a Spinner Rack Junkie posts can attest. Unfortunately, news-and-magazine stand distribution was kinda spotty back in those days, at least in rural Kentucky; just because they had issue #1 of a publication, or even #10, didn't always guarantee the next one or two, even, in some cases issues would be available. Well, that applied to obscurities like CoF or some comics anyway. Anyway, because of this, I missed the above issue, #12, which I'm sure would have blown me away because of the amount of comic book coverage, something which you just didn't see back then. Wikipedia states, and I believe it to be true, that CoF was the first place outside of fanzines that comics criticism took place. Proof of this is below, in which a host of people (many of whom may be familiar to you) rate the then-current comics: 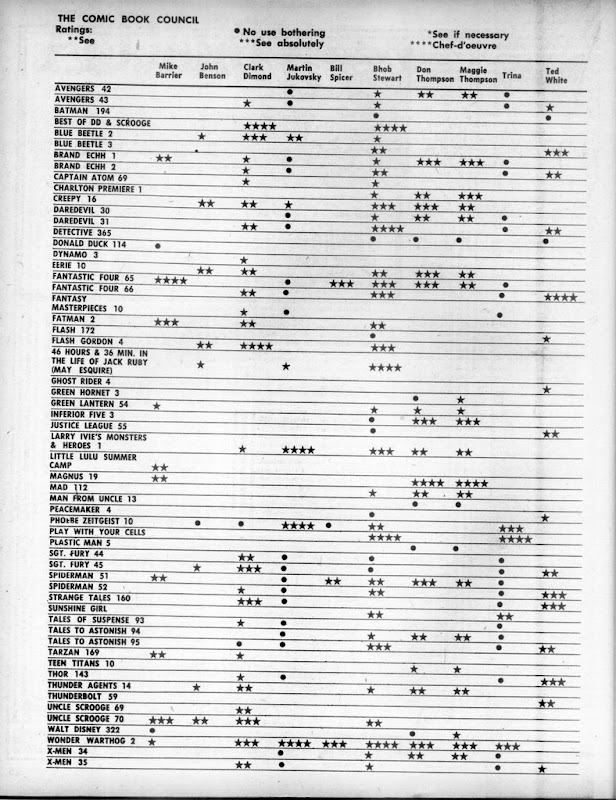 Also adjoining this neato keeno graph page was a round-table of capsule reviews, some of which were written by future Comics Buyers Guide editor/scribe Don Thompson. One comic which particularly drew Thompson's ire was this one: 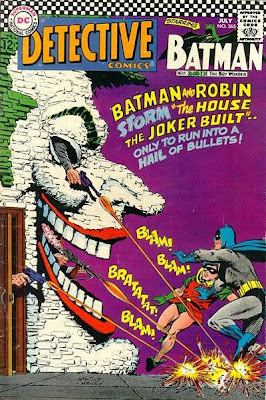 Detective Comics #365, a book that I remember owning as a little shaver (and I still like that Infantino/Anderson cover quite a bit). Thompson, however, wasn't as kind as I:

DETECTIVE COMICS 365 should be bought by no one over the age of seven unless he is (a) mentally retarded or (b) devoted collector of horrible examples or (c) both. Difficult as it must have been to acheive, the publishers of the comic book have come up (or down) with a plot more ridiculous than the producers of the tv show have managed. The word for this isn’t camp, it’s another four-letter word beginning with c and ending with p - crap.

Gee, Don, don't hold back there! Anyway, this amused me, and I'm not trying to say Thompson was wrong- in fact, if it was like most mid-60's Batman stories, it probably was pretty lame.

More cool CoF stuff later, including a comics story by two fellows who would go on to much better things.
Posted by Johnny Bacardi at 5/23/2009 08:35:00 AM