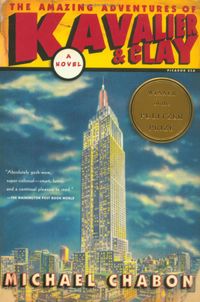 Dr.Fredric Wertham was an idiot; it was obvious that Batman was not intended, consciously or unconsciously, to play Robin's corrupter: he was meant to stand in for his father, and by extension for the absent, indifferent, vanishing fathers of the comic-book-reading boys of America.

For that one paragraph alone, I'd like to shake Michael Chabon's hand. Right effing on, Mr. Chabon.

Anyway, guess you can figure out that I have, after three years and two months, FINALLY finished The Amazing Adventures of Kavalier and Clay. And in a weird way, I kinda felt that a chapter of my life is now complete as well. What began in October 2003, as I picked up a book I'd heard a lot about to have something to read on the plane flight to and from Denver in an optimistic mood with the prospect of a new job, new home, and new life ended today, with a huge disappointment and lots of frustration in between. I stopped reading it about two months after I got the news that I wouldn't get the position; it just reminded me too much of what I had lost and I just wasn't in the mood to read anyway. I picked it up again a few months later, thinking I really should finish the thing but only getting through a couple of chapters, and I did this several times over throughout 2004, 2005 and most of this year as well. But this time I finally got through it.

And what did I think, boring personal bullshit aside? I liked it very much. Chabon has a great way with words- often taking off and soaring with descriptions and clever asides, reminding me a great deal of Mark Helprin. He also has that knack for creating fully realized characters; the principals in particular were vividly brought to life. The last few chapters were especially touching, since we already had invested so much in Joe and Sammy and Rosa and the others. There were times when I thought he was going to let it all get away from him; after the Kavalier and Clay partnership dissolved until the reconciliation at the end, with all the WWII stuff and Clay's relationship with actor Tracy Bacon, it seemed to meander a lot but he managed to rein it in and bring it home nicely.

And as a longtime comics buff, I was highly amused by all the namedropping and cameos by people like Gil Kane and Stan Lee, and impressed with how neatly Chabon integrated his fictional comics companies with the real ones.